The LHSFNA is excited to announce a new partnership with the Centers for Disease Control and Prevention (CDC) to promote the agency’s national tobacco education campaign – Tips from Former Smokers (Tips)™. The LHSFNA has established this partnership because of the tremendous negative effects caused by smoking and exposure to secondhand smoke. These effects include cancers (lung, throat, head and neck, colorectal), heart disease, stroke, COPD, gum disease and preterm birth.

“Raising awareness about the health hazards of smoking is a special concern among LIUNA members and their families,” says LIUNA General Secretary-Treasurer and LHSFNA Labor Co-Chairman Armand E. Sabitoni. “The smoking rate for construction laborers is almost 40 percent, which is more than double the national average. Members who are exposed to chemicals and other health hazards on the job are at even greater risk for negative health effects if they happen to be a smoker.”

About the Tips Campaign

Now in its sixth year, the Tips campaign profiles real people living with serious long-term health issues (stomas, lung cancer, amputations) as a result of exposure to tobacco smoke – either directly from smoking or indirectly from secondhand smoke. The message is simple, yet effective: quit smoking now, and if you’re not a smoker, don’t start.

Three key messages are promoted and enforced throughout the campaign: 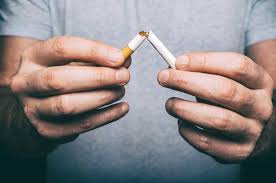 Quitting smoking is not easy. It takes the average person seven attempts to quit for good. The LHSFNA, the Tips Campaign and the quitlines below are here to help you in your attempt to quit. Follow this link for more information and pick up the phone today. You won’t regret it.

The LHSFNA’s Smoking Cessation Program for Laborers and Smoking: Facts and Quitting Tips pamphlets offer suggestions and tips for breaking the tobacco habit. Call 202-628-5465 or order them through the Fund’s Publications Catalogue.

The Tips campaign is getting its message out through social media (Facebook, Twitter, YouTube and Pinterest) as well as TV, radio, billboards, magazines and newspapers. To avoid language barriers, the campaign is being distributed in English, Spanish, Chinese, Vietnamese and Korean.

Resources and Getting the Help to Quit

You can help reinforce the Tips campaign by promoting these three calls to action:

Current smokers are encouraged to call the free and confidential quitline numbers below. The phone lines are staffed by trained health professionals and proven to be highly effective for smokers who want to quit.