In dense urban areas and smaller cities and towns across the U.S. and Canada, drivers often find themselves at odds with pedestrians and cyclists. Statements like “These cars blow right through crosswalks” or “Pedestrians just walk wherever they want” are common. Like most disagreements, the truth is often somewhere in the middle. But the goal shouldn’t be to assign blame – it should be to find potential solutions that could prevent such incidents and save lives.

What Factors Lead to Pedestrian Fatalities?

In nearly half of all fatal crashes, either the driver or the pedestrian was impaired by alcohol; in crashes involving cyclists and drivers, 37 percent were impaired.

Adults over the age of 65 and children under the age of 15 make up about 40 percent of all pedestrian fatalities.

The numbers prove that crossing streets outside of intersections is risky – that’s where 70 percent of pedestrian fatalities occurred. For cyclists, wearing a properly fitted helmet is the most effective way to lower risk for injury or death in the event of a crash.

In 2016, drivers killed 5987 pedestrians in the U.S. – the highest total since 1990. Another 840 bicyclists were also killed in vehicle crashes. These two groups accounted for 18 percent of all traffic fatalities in this country without ever getting behind the wheel. In 2015, almost 129,000 pedestrians received treatment in emergency rooms for non-fatal injuries following a crash.

Many agencies and cities across the U.S. and Canada are looking for ways to reduce these incidents. Unfortunately, many pedestrian safety campaigns are doomed to fail because they try to change the people, not the process. The result is that victims – in this case, pedestrians – end up getting blamed. For example, campaigns that highlight distracted walking or try to raise awareness with slogans like “Look first, walk second” can send the message that drivers have priority and it’s up to pedestrians to keep themselves safe. Not only does this pit drivers and pedestrians against each other, it also hasn’t been a winning formula for reducing fatalities and serious crash-related injuries.

There are proven ways to reduce pedestrian fatalities, though. They involve many of the same principles that safety and health professionals have used to make worksites safer for construction workers. Principles like Prevention through Design and the hierarchy of controls can be applied to roadway safety in some of the following ways: 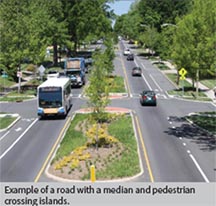 Some of these methods are currently being implemented in cities like New York, Boston, Chicago, Los Angeles and Toronto as part of the Vision Zero network, which aims to eliminate all traffic-related fatalities and severe injuries. There’s good evidence these methods are working; in New York, pedestrian fatalities have dropped from 184 in 2013 to 101 in 2017. The safer road design principles discussed above are easy to see in this picture of a busy street in Seattle, another Vision Zero adopter.

The Vision Zero approach has similarities to Prevention through Design principles and successful safety and health programs in the construction industry. Both types of initiatives look at ways to engineer hazards out of the environment, separate people from hazards and change the way people interact with those hazards. Just like in construction, safety does not come from expecting people to behave perfectly in a dangerous environment; it comes from designing and engineering the environment to put people in the best position to succeed.

LIUNA continues to call for a comprehensive infrastructure package that will revitalize the transportation network across the U.S. When that funding arrives and many outdated roads finally get the updates they desperately need, state and local transportation agencies should be urged to take advantage of this opportunity to incorporate safer road design into these projects.