Highlights from the LHSFNA’s Testimony at OSHA’s Silica Hearings

As three weeks of public hearings at the U.S. Department of Labor drew to a close, the LHSFNA prepared to deliver its testimony to OSHA about the proposed rulemaking to reduce respirable crystalline silica in construction.

Weeks one and two of the hearings heard opponents question the rule’s feasibility and costs, but that opinion was not shared by everyone in the industry. The rule saw support from the National Asphalt Pavement Association, who partnered with union and government officials to successfully reduce silica exposures below the proposed PEL during asphalt milling operations. The hearings also gave voice to those suffering both physically and financially from the inhalation of silica dust. 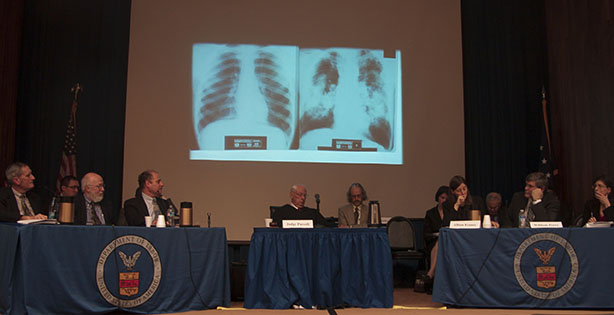 The seven members of the LHSFNA and the Laborers’ panel strongly supported a rulemaking on crystalline silica, but also called for strengthening several provisions of the standard. The key points made by each member of the panel are summarized below, and their full testimony is available online.

“By changing the culture through a new standard, we can preserve worker health, help construction workers lead longer and healthier lives and … make work more productive in the process.”

Scott Schneider’s testimony focused on the dangers of the current PEL and drove home the point that despite falling mortality data, silicosis isn’t disappearing – it simply isn’t being looked for. And since silicosis takes years to develop, the need for medical surveillance is key to worker health. In closing, Schneider touched on how a lower PEL would spur innovation in the construction industry to reduce exposures and protect workers.

“Dust control on construction projects is already an important responsibility of contractors and not a new concept. It is time to even the playing field and hold all parties to the same standard.”

In his testimony, Walter Jones detailed how states such as California mandate controlling silica dust for environmental reasons as well as occupational health. The proposed standard would place the same priority on keeping dust out of workers’ lungs as these states already place on keeping dust from falling in rivers and on passing cars and pedestrians. Table 1 provides pragmatic, easy-to-follow guidelines for controlling silica below permissible levels, and the task-based controls it includes should be a mandatory part of the standard. Jones called on equipment manufacturers and the construction industry to use worker health and safety as a competitive advantage that differentiates them from the competition.

“Numerous OSHA regulations invest power and authority in a competent person and the silica standard for construction should be no different.”

“Our Union members are exposed to silica in a variety of types of construction work, and as a result, they have an increased risk of developing silicosis and other illnesses.”

Dr. Melius discussed the importance of medical surveillance given the risk of serious lung disease and cancer among silica-exposed workers. He then laid out areas in the proposed rule’s surveillance requirements that need improvement. Melius called for putting a priority on maintaining the confidentiality of workers and recommended new solutions on how medical surveillance would function in an industry where workers are constantly moving from site to site.

“People say silicosis isn’t a lost-time issue because it’s internal and takes years to develop, but they’re wrong. There is lost time – the years lost at the end of your life.”

Part of Laborers’ Local #147 in New York City, Eddie Mallon did tunnel work for 44 years before becoming a business agent seven years ago. Last year, he was diagnosed with silicosis and forced to retire. In his testimony, Mallon described years of dusty conditions on the job and the effects silicosis has had on his health. He noted that today’s drilling equipment creates more dust for longer periods of time than the machines used when he was younger, and urged OSHA to act quickly to protect young workers now coming into the industry. 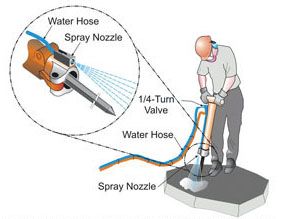 “Adequately controlling crystalline silica in construction is just not that difficult with the three Ws: Water (sprays), Wind (local exhaust ventilation) and a Will to act.”

Ken Hoffner’s testimony centered on the NJLHSF’s successful efforts to ban the dry cutting of brick, block and other silica-containing materials in New Jersey. Hoffner also shared details about a water spray control for jackhammers that reduces respirable dust levels by 90 percent and only costs around $350, proving that with a little innovation, the problems of silica dust can be overcome.

“LIUNA members are on the front line for implementing the work practice and engineering control provisions of the silica standard. It is imperative workers directly engaged in dust-generating operations receive task and equipment-specific training which includes a hands-on component to ensure competency.”

Tom Nunziata was clear that OSHA’s final standard should take a stronger stance in providing the training and information workers need, both to properly operate silica-generating tools and use associated controls. Nunziata shared LIUNA’s firm belief that educating and training workers about the hazards they face on the job is critical to protecting their health as well as the health of those not directly engaged in dust-generating operations.