Turn off Distractions when Driving 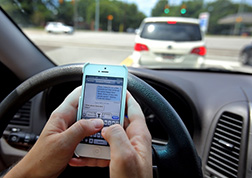 Today's wired world makes it increasingly likely that you will have a run-in with a distracted driver or be one yourself. Throughout the United States and Canada, distracted driving threatens the safety of all drivers, passengers and bystanders including Laborers working in highway work zones. Every year, distracted driving kills nearly 6,000 people and injures more than 500,000.

“Drivers using cell phones or accessing social media through dashboard apps are behind most of these tragedies. When driving, take precautions by limiting these distractions,” says LHSFNA Management Co-Chairman Noel C. Borck. “When you are behind the wheel, it is crucial to your safety and the safety of everyone around you that you remain focused on the road.”

Emergency responders remove the
body of one of two construction workers killed by a driver who drifted into this highway work zone in Burnsville, Minn..

Laborers toiling in highway work zones are particularly vulnerable. New research on work zone safety found that 45 percent of highway contractors had drivers crash into their construction work zones during the past year. Injuries and deaths resulted from most of these instances. More than 20 percent of the time these injuries were to construction laborers, of which six percent became fatalities.

Distracted driving is any activity that shifts a person’s attention from the task of driving. Drinking a cup of coffee or applying make-up while behind the wheel can have fatal consequences. So can reading a map or glancing away from the road to talk to a passenger. However, it is the growing number of gadgets at a driver’s disposal that has turned distracted driving into an epidemic. During any given daylight moment, in the U.S. alone, 660,000 drivers are multitasking with cell phones and other electronic devices. Many times they are engaging in this dangerous behavior while going about their workday making supply deliveries and site visits. According to OSHA, motor vehicle crashes are now the leading cause of worker fatalities. 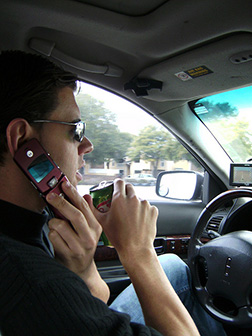 Drivers talking on cell phones are often ignoring laws that forbid or limit hand-held cell phone use. Other times they are using hands-free devices that, while allowed in many jurisdictions, are just as hazardous.

Whether hand-held or hands-free, drivers talking on cell phones are subject to inattention blindness: they don’t see what is in front of them. Inattention blindness has caused drivers to drift into highway work zones, run traffic lights, roll through stop signs, rear-end vehicles and, in Grand Rapids, Michigan, to kill a young boy who had just gotten off a school bus. 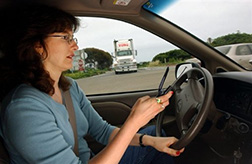 While you are reading this, hundreds of thousands of drivers in the U.S. and Canada are taking their eyes off the road to send or read a text. Most of these drivers would never dream of climbing behind the wheel while intoxicated, but they might as well be doing so.

According to the National Highway Transportation Safety Administration, texting drivers are as likely to brake in time to avoid hitting a stopped car in front of them or a child darting into the street as someone who has just had four beers. Texting while driving makes a driver 23 times more likely to crash.

Currently, 42 states in the U.S., in addition to the District of Columbia, Guam, Puerto Rico and the U.S. Virgin Islands, ban text messaging for all drivers. Five additional states prohibit text messaging by novice drivers and three restrict school bus drivers from texting.

In Canada, texting while driving is against the law in Canada with the exception of the province of Nunavut.

Mini-jacks and USB ports – standard in most new cars – enable drivers to plug personal music devices into a car’s audio system. Meanwhile, more auto manufacturers are developing dashboard apps that make it possible to order movie tickets, peruse restaurant listings and check Facebook updates without getting out of the driver’s seat. No one disagrees that these services can be distracting, but the car industry says they are less so when accessed by voice commands, buttons on the steering column and touch screens.

“[Drivers] are using these apps on their smartphones, anyway,” said Jim Buczkowski, Ford Motor Company’s director of electrical and electronics systems, in an interview with the New York Times. “So how can we enable them in a nondistracting way?”

As opportunities to multitask at the wheel continue to expand, drivers and passengers must take steps to reduce distractions. The Department of Transportation recommends: