With Fatal Falls on the Rise, OSHA Takes Action

Fall safety has come a long way since this iconic Depression-era photo depicted 11 ironworkers dangling 800 feet above New York’s streets while eating lunch. “However, despite all the improvements in fall prevention, falls continue to be the leading cause of death in the construction industry,” says LIUNA General President Terry O’Sullivan. “Each year workers across the country still lose their lives in falls that are preventable.”

Bureau of Labor Statistics (BLS) data shows that the number of fatalities from falls in construction actually increased from 2011 to 2012. As part of a national fall prevention campaign, OSHA, NIOSH and the Center for Construction Research and Training (CPWR) collaborated to create www.stopconstructionfalls.com. The site offers toolbox talks, instructional videos and handouts, research reports, campaign news and success stories. But it also gives a stark view of how many lives were lost to construction falls in 2013 through its interactive Fatality Map, where each fatal fall is represented by an orange pin. “There are far too many pins on that map,” says O’Sullivan. “Proper training and the widespread use of protective measures like safety harnesses are the key to making sure workers walk away from these incidents safely.”

In an effort to raise awareness among employers and workers about the dangers of falls, OSHA has announced a National Safety Stand-Down for the week of June 2-6. The program aims to help employers and workers prevent falls in construction, and there is plenty of room for improvement. In 2012, almost 9,000 construction workers across the country experienced a fall that caused them to miss work.

“Falls account for more than a third of all deaths in this industry,” says Dr. David Michaels, OSHA’s Assistant Secretary of Labor. “We are getting the message out to America’s employers that safety pays and falls cost.”

The National Safety Stand-Down will provide employers and workers with educational resources in English and Spanish. These fact sheets, posters and training materials will offer guidance on planning ahead to prevent falls, using the right equipment and training employees in the proper use of that equipment. OSHA hopes this event will help employers comply with fall prevention safety standards, which were in the top 10 of OSHA’s most frequently cited violations in 2012.

Employers can participate in the stand-down by stopping work at some point during the week to give a toolbox talk focused on hazards, protective measures and the company’s policies and goals. To encourage participation, OSHA created suggestions that employers can use to prepare for a successful stand-down.

After participating, employers will be able to provide feedback about how to improve future OSHA safety initiatives and share their stand-down experiences by emailing oshastanddown@dol.gov. 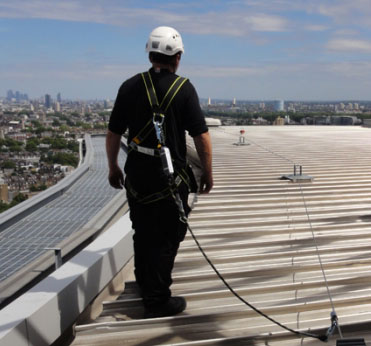 OSHA is also taking a closer look at state fall protection laws to ensure they align with federal standards. Federal OSHA recently issued a letter to the Arizona Division of Occupational Safety and Health (ADOSH) detailing how the state’s new fall protection requirements no longer meet federal standards. The revised Arizona law requires fall protection starting at 15 feet for residential construction, whereas federal OSHA requires it at 6 feet. With BLS data showing 25 percent of fatal falls in residential construction occur between 6 and 15 feet, this gap creates a distinct danger for workers.

OSHA’s letter to ADOSH illustrates the differences in these two approaches by using recent examples within Arizona:

First, a contractor following only the state standard:

“A construction worker … was walking on a loose truss and was not tied off. He lost his balance and fell approximately nine feet to the concrete driveway/sidewalk below. The worker underwent surgery for swelling from bleeding on the brain, broken ribs, a dislocated shoulder and a broken finger.”

Then, a contractor choosing to protect employees to the federal standard:

“A worker … was performing residential construction at an elevation of 10 feet when the wind picked up strand board striking the worker and causing him to lose his balance; he was uninjured due to the personal fall restraint system his employer had required and provided.”

Federal OSHA has threatened to take over jurisdiction of the state’s safety program unless ADOSH shores up this dangerous gap in its fall protection standards. Arizona Senators John McCain and Jeff Flake have stepped in to urge OSHA to reconsider taking over the state plan, but OSHA has shown no signs of letting this hazard continue into the future.

The LHSFNA provides many services, including reviewing a contractor’s worksite to ensure compliance with Federal and State standards and industry best practices. For help creating a Fall Prevention Program or reviewing an existing program, call the Occupational Safety and Health Division at 202-628-5465.