Spring Is Here and So Are Ticks 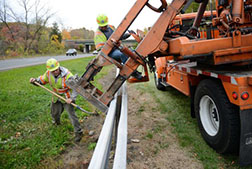 Ticks that carry Lyme disease and other illnesses are showing up earlier and in more places. Laborers working at outdoor construction sites need to be vigilant about protecting themselves from these parasites.

Being familiar with the varieties of ticks that are common to an area is essential. Ticks have distinctive markings and some carry pathogens that cause at least 14 diseases in humans. If you become ill from a tick bite, knowing what a particular tick looks like can speed your diagnosis and treatment.

It is also important to be aware that some ticks transmit more than one pathogen and that some diseases are transmitted by more than one kind of tick. Here are some examples:

If you find a tick on you, removing it promptly and properly will reduce your risk for becoming ill:

The blacklegged tick and its close cousin on the Pacific Coast, the western blacklegged tick (both are more commonly called deer ticks), transmit Lyme disease, the most common tick-borne illness in North America. About 30,000 cases of Lyme disease are reported in the United States every year, but the Centers for Disease Control and Prevention (CDC) says the real number of cases is more like 300,000.

Lyme disease can cause chronic arthritis, impaired memory and heart rhythm irregularities. When treated with the appropriate antibiotics in its early stages, people with Lyme disease usually make a complete recovery. Unfortunately, this window of opportunity is often lost. Like many tick-borne diseases, initial symptoms of Lyme disease mimic other more common illnesses and are often misdiagnosed.

Early symptoms of Lyme disease include:

Blacklegged ticks are among the varieties of ticks that transmit multiple pathogens. Anyone being tested or treated for Lyme disease should also be tested for anaplasmosis, babesiosis and borrelia miyamotoi as it is possible to be co-infected.

Protect yourself from these and all tick-borne diseases:

The LHSFNA’s Health Alert on Lyme disease provides information that Laborers can use to help protect against all tick-borne illnesses. To order this or other Fund publications, go to www.lhsfna.org and click on Publications.

The CDC has a manual that provides an in-depth look at all of the tick-borne diseases in North America. Download it here.