This Medical Screening Should Never Be Delayed

You’ve got lots of company if you are over the age of 50 and haven’t gotten around to having your first colonoscopy. Many people arriving at their half-century mark ignore the American Cancer Society recommendation to have this initial colorectal cancer screening. Mostly, it’s because they are squeamish about the colon-cleansing preparation it requires as well as the procedure itself.

However, in putting off this test, they put their health at risk.

As for that colon cleanout that gives everyone pause, there’s no way around the fact that you do have to drink a concoction or take some pills that will lead to numerous visits to the bathroom. However, options in flavoring and how much you need to consume can make this prep more palatable.

Most people who have had a colonoscopy say afterwards that the anxiety beforehand is far worse than the reality. The procedure, which is performed under sedation, takes 30 minutes to an hour and patients feel little discomfort during or after. It’s also a very minor inconvenience when you consider that when caught in the early stages, colorectal cancer is highly treatable, with a five year survival rate of 90 percent. Unfortunately, most colorectal cancers are found after they have spread.

There are other screenings for colorectal cancer, but the colonoscopy, which involves the insertion of a flexible, lighted tube that allows a doctor to examine the colon and rectum from the inside, is the gold standard. It is the only screening that in addition to detecting cancer can sometimes prevent cancer from developing in the first place. 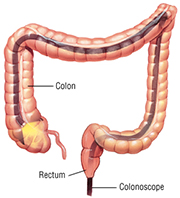 Colorectal cancer usually starts as an abnormal growth – a polyp – that forms in the inner lining of the colon or the rectum. Not all polyps are cancerous. However, there is no way to predict whether or not a polyp will become cancerous and doctors recommend that when one is found, it should always be removed and tested.

This is where the advantages of a colonoscopy come into play:

A colonoscopy’s other benefit is that based on their doctor’s recommendation, patients who get a clean bill of health can usually wait five to 10 years before it’s time for the next one.

So if you’re a member of the “50-and-Over” club who has been putting off getting their first colonoscopy, now is the time to have it done. Health is something that should never be left to chance. This screening is one of the most important measures you can take to help ensure you have good health in the years ahead.