With about 700,000 construction companies in the U.S. and only about 2,200 OSHA inspectors, it’s no secret that many contractors may never face an OSHA inspection. New data from OSHA’s Directorate of Cooperative and State Programs (DCSP) shows that over the last six years, these odds have gotten even lower. 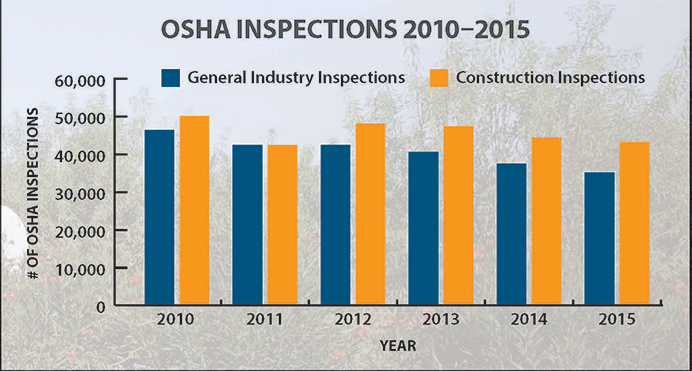 This trend might be understandable in a down economy, but U.S. Census Bureau data shows construction spending is actually on the rise. This downturn in inspections becomes even more alarming when comparing federal and state OSHA plans. 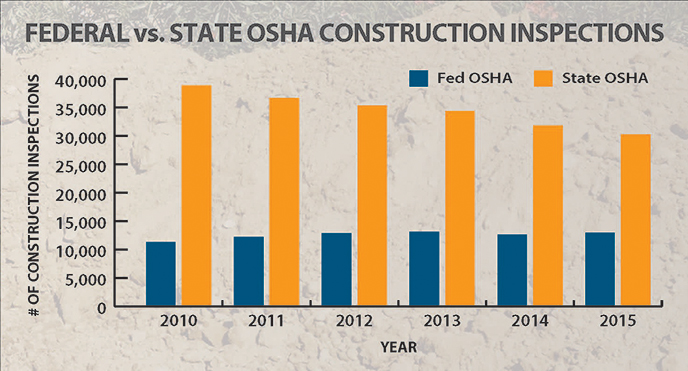 The chart above shows that while federal OSHA inspections have increased over time (up 13 percent since 2010), inspections at state OSHA programs are dropping at a rapid rate (down 23 percent in the same span). Over just the last six years, this drop-off equates to about 7,000 workplace inspections that never took place.

Of the 27 states with state OSHA plans, only Hawaii, Arizona and Utah have increased inspections. The 10 states with the biggest decrease were all state-run programs. In addition to Washington, which led all states with a decrease of more than 40 percent, other states in the bottom 10 included California, Illinois, New York, New Jersey, North Carolina and Oregon.

So what’s causing this decrease in inspections? The answer, in most cases, is budget cuts. Federal OSHA provides about half the funding for state-run programs, but the rest depends on state legislatures. In many states, budget cuts are leading to fewer inspectors and fewer possible inspections. For example, budget cuts in Virginia have left the state with twelve vacant enforcement positions. It’s a similar story in California and in other states across the country.

Studies show that as enforcement falls, so does compliance. This puts workers at increased risk, since contractors looking to cut corners are more likely to do so if no one is watching. It also allows low-bid contractors to continue undercutting and winning work from responsible employers who are committed to providing a safe workplace. And in an industry that still has more on-the-job fatalities than any other sector in the U.S., oversight and enforcement is still a necessity.

It takes more than laws on the books to run an effective occupational safety and health agency. It’s time for state legislators, governors and other elected officials around the country to stop ignoring their obligation to help protect workers on the job.

Inspection data for this article was provided courtesy of the DCSP.