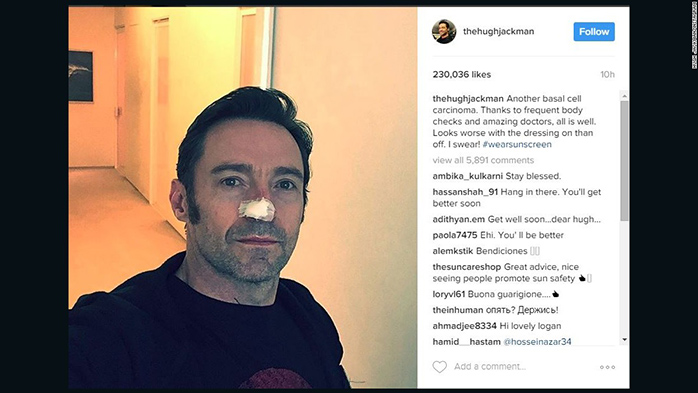 Hugh Jackman is a cautionary tale for what can happen when you don’t protect your skin from the sun. 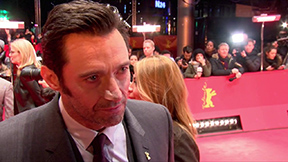 When the Wolverine star arrived at the recent premiere of Logan, the small bandage on his nose was evidence of his latest treatment for skin cancer. Jackman has had six basal cell carcinomas removed since 2013, a circumstance he attributes to not wearing sunscreen as a child.

“I don’t ever remember being told to put it on,” said Jackman, who now goes for skin checks every three months. He joins a growing list of celebrities who have publicized their battles with skin cancer to raise awareness about the importance of sun protection.

Skin cancer is the most common cancer in the U.S. and Canada and exposure to the sun’s ultraviolet (UV) rays is the top risk factor for the disease. However, studies show that sun protection is still not a priority for most Americans and Canadians. This makes deaths and disfigurements from skin cancer particularly tragic because in many instances they could have been prevented. The LHSFNA’s annual Sun Sense Plus campaign reminds LIUNA members about skin cancer risk both on and off the job and encourages members to protect themselves.

“Many LIUNA members now know about the dangers of sun exposure and what they can do to reduce their risk because of the LHSFNA’s annual Sun Sense Plus campaign,” says LIUNA General Secretary-Treasurer and LHSFNA Labor Co-Chairman Armand E. Sabitoni. “This year, the Fund is making it easier to get campaign materials into the hands of LIUNA members by bringing the entire ordering process online. The Fund hopes that expanding the reach of this important campaign will benefit even more members across the U.S. and Canada.”

LIUNA District Councils, Local Unions and signatory contractors can order Sun Sense Plus products and educational materials now through the Fund’s online order page or go to www.lhsfna.org and click on “Order Sun Sense Plus Materials.”

The UV exposures that cause skin cancer are cumulative and usually occur years before the disease appears. That is why it’s important to routinely examine your skin for changes in moles, freckles and skin growths and have an annual skin check performed by your health care provider even if you no longer spend a lot of time in the sun. The good news is that skin cancer is highly curable when it’s found early.

To promote sun safety awareness, the National Council on Skin Cancer Prevention has designated the Friday before Memorial Day, May 26, as “Don’t Fry Day.” On this day and every day, follow these tips and stay safe in the sun:

This is also the time of year when LIUNA members, especially those who work in construction, are at increased risk for heat stress. Lifelines will examine this hazard in more detail next month.