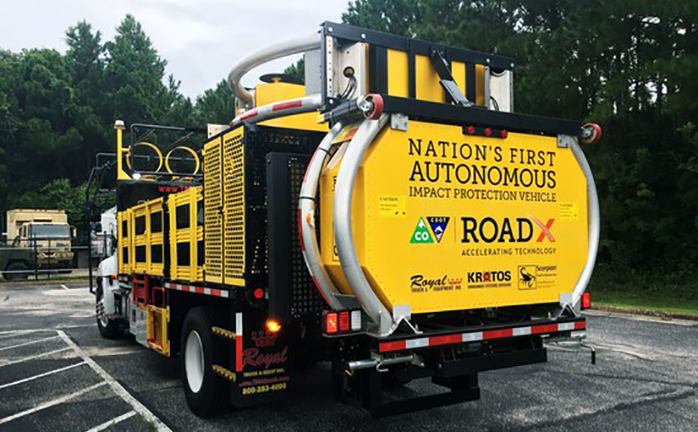 Warning signs, barriers and other countermeasures can reduce some of the risks workers face in highway work zones, but they don’t totally eliminate the hazards. Working with and around heavy highway equipment is never completely free of danger. Neither is constantly being in close proximity to traffic, where drivers may be angry, tired, distracted or under the influence. 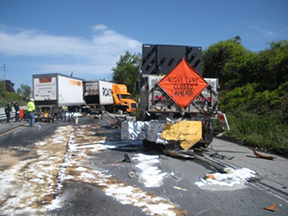 On average, 121 workers at road construction sites are killed on the job every year and more than 20,000 are injured. The majority of these fatalities and injuries occur when workers are struck by backing construction equipment or when motorists drive into the work zone. To reduce these risks, many contractors use impact protection vehicles equipped with truck-mounted attenuators (TMAs).

“These vehicles follow road crews and create a physical barrier between workers and the public that can save a life in the event of a work zone intrusion,” says LIUNA General President Terry O’Sullivan. “Remotely operated equipment protecting the work zone could potentially eliminate deadly work zone intrusions and that is a positive step for work zone safety.”

TMAs are designed to be hit, which makes driving them a potentially dangerous job. In Colorado alone, there have been 26 incidents of motorists crashing into TMAs over the last four years. These vehicles are usually unoccupied when protecting a stationary work site, but projects such as paving often involve workers following alongside as the job progresses. That’s why this past summer, the Colorado Department of Transportation (CDOT) began using a remote-controlled impact protection vehicle operated by a driver in another truck traveling ahead of it. If the wireless connection is lost, the driverless vehicle automatically comes to a stop. If the vehicle with the TMA is hit, there’s nobody sitting in the cab that can be injured.

“People often talk about the coming job displacement of automated vehicles – well this is actually one job I want to get people out of,” said Shailen Bhatt, executive director of CDOT. “The idea that we have a truck thats job is to get hit, with someone sitting in it, well that doesn’t make a lot of sense.”

Here’s a look at how this technology works:

CDOT tried out the driverless TMA on a road striping project in Fort Collins and plans to use it on other projects as well. If this technology proves successful and becomes more common, it has the potential to improve work zone safety. There’s also potential for improved productivity in the future as automation technology improves and frees up workers to take on tasks other than remote piloting and monitoring of autonomous vehicles.

How Does Self-Driving Technology Work? 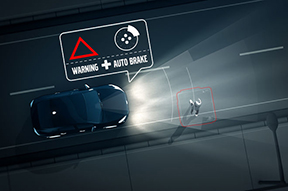 CDOT’s remote-controlled vehicle is just one example of how self-driving technology, though still in its infancy, has the potential to make our highways safer, and not just for the men and women working in work zones.

Depending on the degree of automation − sensors, cameras, radar and software among them − self-driving or autonomous vehicles can detect and sometimes react to a safety risk. Many new cars are now able to warn drivers when they are drifting into another lane or when they’re too close to an object when backing up. Some can even brake automatically if a vehicle ahead suddenly stops or slows down.

Self-driving technology is currently rated by one of five different degrees of automation:

Level 1: Certain systems, such as cruise control or automatic braking, may be controlled by the car, one at a time.

Level 2: The vehicle offers at least two simultaneous automated functions, like acceleration and steering, but requires the driver to keep hands on the wheel and monitor the situation.

Level 3: The vehicle can manage all safety-critical functions, but the driver is expected to take over when alerted. 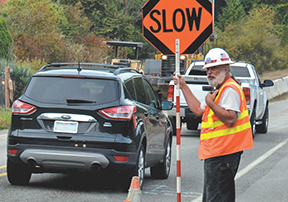 Level 4: The vehicle is fully-autonomous in some driving scenarios, but the driver may have the option to control the vehicle.

Level 5:The car is completely capable of self-driving in all situations.

While it will likely be some time before this technology progresses to the point where a vehicle will, for example, be able to react on its own to a flagger’s hand gestures, it’s good to see progress being made to improve safety in highway work zones.

“[T]echnology can take transportation safety to a new level and forever improve the way we work,” said Bhatt. “By using self-driving technology, we're able to take the driver out of harm's way while still effectively shielding roadside workers."