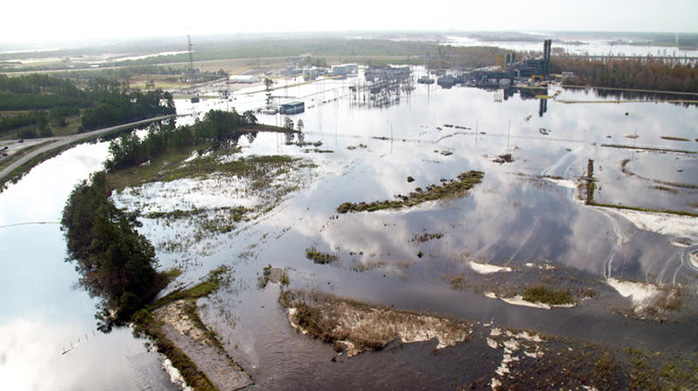 During a hurricane, strong winds, flash flooding and flying debris present an immediate danger to those caught in the storm. What many people don’t realize is that the aftermath of a hurricane also presents many serious health hazards. We wrote about some of these risks in our October 2017 article, “Avoid These Hazards During Hurricane Cleanup.”

“Contaminated flood water is one of the most dangerous post-hurricane hazards,” says LIUNA General President Terry O’Sullivan. “From sharp objects to infectious bacteria like E.coli and Salmonella, standing water can hide many different health hazards for cleanup workers and the general public. These hazards are just as much of an issue in cities with outdated water infrastructure as they are in rural areas that have large numbers of livestock.”

For example, after Hurricane Florence in September, there were reports of overflowing animal waste pits at North Carolina pig farms. To reduce breaches, farmers often pump this waste into the surrounding fields prior to the storm, all but guaranteeing it will join the runoff when flood waters rise.

What Is Coal Ash?

Similar to areas with large numbers of livestock, areas around coal-fired power plants may be at additional risk from toxic flood waters due to coal ash. Coal ash is the powdery substance left behind after coal is burned. Also known as coal combustion residuals (CCRs), coal ash is produced mostly at coal-fired power plants, where it takes the form of fly ash, bottom ash and boiler slag.

Coal ash contains many hazardous materials, including mercury, arsenic, cadmium and lead. Several of these substances are known to cause cancer in humans, and all of them cause negative health effects. See the graphic below for some examples: 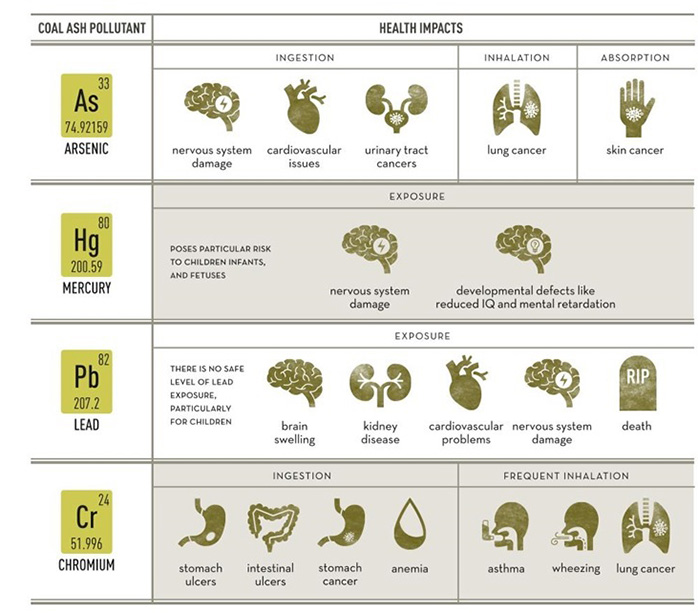 About 140 million tons of coal ash are generated each year, making it one of the biggest sources of industrial waste in the U.S. About half of all coal ash is recycled into construction materials such as concrete and wallboard, leaving the other half to be disposed of. In the past, coal plants would send the other 70 million tons of ash into the air through smokestacks. The large, dark plumes of smoke led to what’s commonly called “acid rain.” Now, Environmental Protect Agency (EPA) rules force plants to collect most of that ash and dispose of it in other ways.

How Is Coal Ash Handled and Stored?

Power plants mix the reclaimed ash with water and divert it into pits and landfills. Many of these sites sit along the banks of rivers, lakes and streams, with only walls of dirt separating waste from fresh water. Like the ponds of pig waste mentioned above, these surface ponds overflow during hurricanes and other extremely heavy rainfall, allowing toxic chemicals to mix with flood waters and eventually make their way into rivers, streams and drinking water sources.

This is exactly what happened when Hurricane Florence made its way across North Carolina earlier this year. Aerial views showed coal ash ponds that had already been breached or were likely to be breached as the water continued to rise. In the case of one power plant, an overtopped dike flooded an adjacent dump containing 400,000 tons of coal ash. Later that week, there were reports that “wide swaths of gray material could be seen floating in the lake and river.”

While these surface impoundments are often called “ponds,” that term can be misleading, since their average size is roughly 100 acres. It’s estimated that there are about 1,000 coal ash ponds across the U.S., many of which were constructed in the 1950s and 1960s when a lack of regulations allowed them to be completely unlined. While many are located in coal heavy states like Ohio, Indiana and Pennsylvania, the greatest concentration of them are in southeastern states like Georgia, North Carolina and South Carolina, which are often hit hard by hurricanes.

How Is Coal Ash Regulated?

Despite these hazards to drinking water and human health, coal ash is not as regulated as you might think. The EPA classifies coal ash as solid waste, not hazardous waste, so it falls under the same disposal and storage rules as common trash. Power plants are required to assess and monitor the stability of coal ash ponds and clean up contamination if it does occur. If coal ash was classified as hazardous waste, it would have much stricter storage and handling requirements. That would include assessing risks posed by hurricanes and taking steps to control those risks and manage the harmful substances in coal ash safely.

In 2015, the EPA released new rules for the management of coal ash ponds, but those new rules didn’t address power plants that had been retired, which would have allowed many unlined coal ash ponds to operate indefinitely. A 2018 decision by the D.C. Circuit Court struck down parts of this ruling, finding that the EPA’s approach did not “address the identified health and environmental harms documented in the record.” This has forced the EPA to revisit the regulation.

Reuse of Coal Ash Could Pose Risk to Laborers

Laborers can also faces risks from coal ash in other ways. LIUNA members are often involved in the cleanup of coal ash spills, such as this TVA spill in 2008. Members can also be exposed to the hazardous substances in coal ash during regular construction activities. That’s because coal ash is recycled into concrete, brick, block and wallboard.  Construction laborers working with these common construction materials in ways that produce respirable dust (e.g., cutting, breaking) and skin exposure can be at risk from the toxic contaminants that make up coal ash.

Recycling coal ash is another example (asbestos and lead are others) of how hazardous materials tend to stick around in our environment and continue to cause  harm. Better regulations for how coal ash is used and stored could go a long way toward keeping LIUNA members and the general public safe from this toxic byproduct of coal-fired power plants.