Co-worker Smoking Can Endanger Your Baby 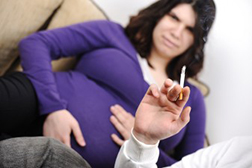 Congratulations are in order if you are expecting and quit smoking to help ensure your baby’s health. However, if smoke-free policies are not in place where you work, the odds of giving birth to a healthy child may not be in your favor.

Using data from the 2010 National Health Interview Survey, researchers from the National Institute for Occupational Safety and Health (NIOSH) have determined that in the United States, one in 10 nonsmoking, working women of reproductive age are exposed to secondhand smoke. (In Canada, smoke-free workplace laws are in effect in most provinces and territories.) Exposure to secondhand smoke increases the chances that pregnant women will give birth prematurely to children of low birth weight.

“Exposure to secondhand smoke also raises the risk for cancer, heart disease and other serious and chronic illnesses,” says LIUNA General Secretary-Treasurer and LHSFNA Labor Co-Chairman Armand E. Sabitoni. “Twenty-six states and the District of Columbia have laws requiring private workplaces, restaurants and bars to be smoke-free. However, many of these laws do not cover outdoor spaces, so pregnant women and other nonsmokers could still be at risk for exposure to secondhand smoke.”

In the remaining 24 states, unless employers have elected to implement their own smoke-free workplace policies (including outdoor spaces), pregnant women and other nonsmokers may not be able to avoid exposure to secondhand smoke.

What is secondhand smoke?

Sidestream smoke is more toxic than mainstream smoke. It has a higher concentration of carcinogens and contains smaller particles that can more easily lodge in the lungs and in the body’s cells.

What are the effects of low birth weight?

Babies weighing less than 5 pounds, 8 ounces at birth are considered to be of low birth weight. (Average birth weight for babies born in the U.S. is 7 pounds, 5 ounces.) Complications during pregnancy, poor maternal nutrition, or drug and alcohol abuse can lead to low birth weight in infants born full term (37 to 41 weeks) but most instances are due to premature birth (before 37 weeks).

What about Thirdhand Smoke?

Have you ever walked into a room or gotten into a car that smells of cigarettes even though no one is smoking? This is thirdhand smoke – tobacco smoke residue that builds up on walls, curtains, upholstery and other surfaces.

Thirdhand smoke reacts with common indoor pollutants including chemicals in carpet fiber, cleaning products and cooking odors to create a toxic mix of air that can be hazardous when inhaled. Children are believed to be extremely sensitive to thirdhand smoke.

Thirdhand smoke is difficult to get rid of. Normal cleaning methods will not remove it and it cannot be cleared from a room by opening windows, using fans or confining smoking to certain areas of a house.

The only way to protect nonsmokers from thirdhand smoke is to create a smoke-free environment. That means no smoking anywhere in homes, vehicles, restaurants, hotels and other public places.

Low birth weight increases risk for respiratory and heart problems, sleep apnea, jaundice and anemia, and is a leading cause of infant mortality. Children born at low birth weight are more likely to struggle with hyperactivity and to have developmental issues that make it difficult for them to do well in school.

All workers, not just those who are pregnant, benefit from working in smoke-free environments. Regardless of whether a workplace is indoors or an outside construction site, all employers should implement smoke-free workplace policies. They should also encourage employees who do smoke to quit.

The LHSFNA’s Laborers’ Guide to Tobacco and Quit Smoking Survival Kits offer suggestions and tips for breaking the tobacco habit. Order these and other brochures and posters that contain information about the hazards of tobacco by going to www.lhsfna.org and clicking on Publications.