The LHSFNA is proud to congratulate Travis M. Parsons, Associate Director of the Occupational Safety & Health Division, for being awarded the prestigious Distinguished Service to Safety Award by the National Safety Council (NSC). Travis and five other deserving nominees were honored with this award at the NSC 2019 Congress & Expo in San Diego, California. 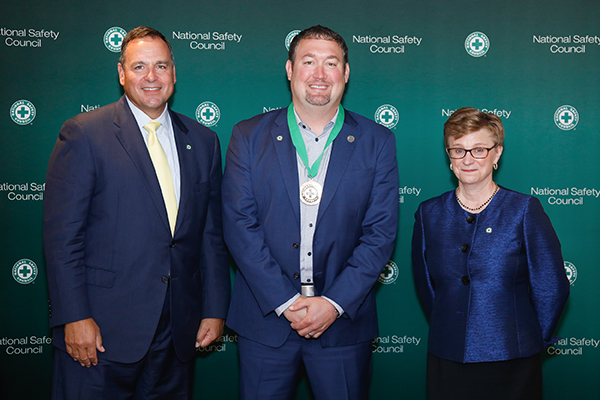 The Distinguished Service to Safety Award is the highest honor given by the National Safety Council, and recognizes exemplary efforts and contributions to the field of safety and health. Each year, candidates are nominated by the public and NSC members before being chosen by NSC Division committees.

“My dad put it best when I told him about the award,” said Parsons upon receiving the award during the opening session of this year’s expo. “To receive an award where you’re nominated and praised by your peers, both the people you work beside every day and your leadership that you work for, which is what this encompasses, there’s not a much bigger honor when it comes down to it.”

When accepting nominations for the Distinguished Service to Safety Award, the National Safety Council seeks out candidates who have had a sustained impact on the safety movement at the local, national or international level that resulted in increased injury prevention. This can also include advancement of safety theory and research.

Through his work at the Fund, Travis has taken the lead on improving safety at both the local and national level. Within LIUNA, he’s contributed to response efforts that helped keep LIUNA members safe during cleanup after several natural disasters, including Hurricanes Katrina, Sandy and Harvey. As an OSHA Master Instructor, Travis has taught OSHA 500, OSHA 10 and 30 hour, competent person and roadway safety courses. He has also served two terms on the Virginia Safety and Health Codes Board and acted as Board Chair. 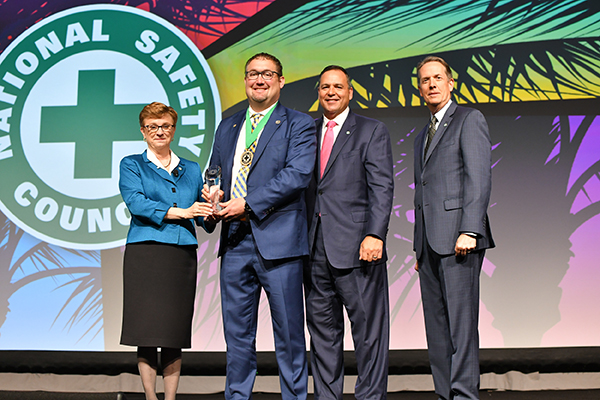 In addition to responding to requests from LIUNA signatory contractors that need assistance with safety hazards and health risks on individual sites, Travis always has an eye on advocating for policies and practices that can impact worker safety and health on a larger scale. He represents the Fund on the NORA Construction Sector Council, which sets the agenda for NIOSH research into worker safety and health issues, and is part of OSHA’s Alliance Program Construction Roundtable, the NABTU Safety and Health Committee, the National Demolition Association Committee and numerous other groups. He’s advocated for worker safety and health to numerous agencies at the federal and state level, including during hearings in advance of OSHA’s silica, confined spaces and hexavalent chromium standards. Outside of his regulatory advocacy, Travis has worked to develop and strengthen consensus standards in the areas of demolition, work zone safety and noise through his involvement with ANSI.

Travis is also an active part of the NSC’s Road to Zero Coalition, which seeks to end roadway safety deaths completely by 2050. In a campaign that emphasizes ending deaths among motorists and the traveling public, Travis has been able to add valuable perspective on how solutions like increased funding for positive protection on highway jobs can prevent deadly work zone intrusions among LIUNA members and other construction workers.

Travis and his fellow 2019 honorees join a list of award recipients dating back over 70 years. The first Distinguished Service to Safety Award was presented in 1942 as a way to recognize people and companies supporting U.S. workers during World War II by reducing occupational injuries.

Anyone who has worked with Travis knows that he is truly passionate about the field of safety and health and the Fund’s joint labor-management mission. To him, this is more than a job – it’s a calling. We see his dedication to worker safety and health on display every day here at the Fund, and know this award recognizing his exemplary contributions to the field is well-deserved.