Even though asbestos is no longer used in construction, its history as a go-to material for fireproofing, strengthening pipes and a variety of other uses means there’s still plenty of it in existing buildings. When asbestos in those buildings is disturbed, such as during demolition activities, there are very clear procedures that must be followed to prevent hazardous exposures to workers and other bystanders.

“When it comes to the safe removal and abatement of asbestos, there’s no middle ground,” says LIUNA General President Terry O’Sullivan. “Strict regulations for handling, removing and cleaning up asbestos are in place to protect the health of workers and others on the job. When these regulations are circumvented, workers’ lives are put in jeopardy due to exposures that lead to deadly respiratory diseases, lung cancer and mesothelioma.”

OSHA’s permissible exposure limit (PEL) and regulations for asbestos are among the strictest there are for any chemical health hazard. Unfortunately, these regulations weren’t followed during the demolition of the former General Motors plant near Newport, Delaware. Video captured inside the plant shows asbestos particles suspended in the air and blowing through the workplace to the point that they were compared to snow falling indoors.

The video drew the attention of state investigators, who spoke with workers on site and verified the contractor’s illegal and unsafe asbestos abatement practices. According to Shawn Garvin, secretary of Delaware’s Department of Natural Resources and Environmental Control, “Workers provided us with information that left no doubt that they were not doing what was supposed to be done.” The state found the contractor in violation of several state laws governing the safe removal of asbestos and fined them $66,000. 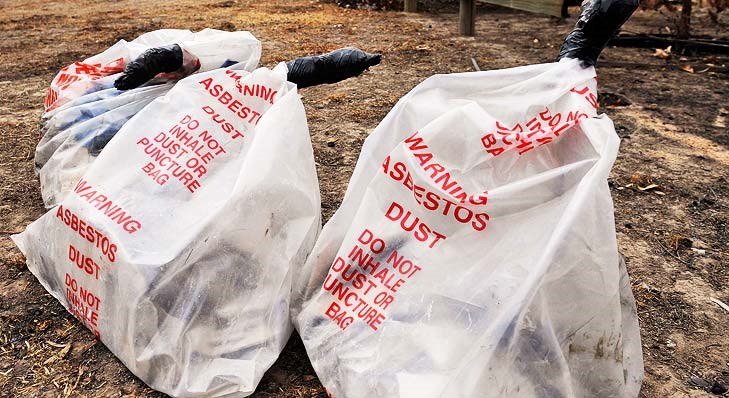 This non-union contractor, Ecoservices, which operates out of Exton, Pennsylvania, had been hired as a subcontractor specifically to perform asbestos abatement. Instead, state investigators found that the company failed to:

Workers on site also alleged that a foreman ignored complaints about the unsafe practices and let work continue. Those statements and the video evidence make it hard to believe that Ecoservices was taking the steps necessary to comply with the law and protect the safety of their employees and other workers on site. Here’s another video captured on site of a piece of machinery crushing asbestos-containing panels in a dumpster.

Any professional asbestos abatement contractor knows this isn’t even in the ballpark of legal, responsible asbestos removal. Regulations to seal off or encapsulate the work area and wet down asbestos before disturbing it are in place to prevent the material from becoming airborne, where it can be inhaled by workers or bystanders.

No action has been taken against the general demolition contractor or the developer, Harvey Hanna and Associates. On a website run by the developer, Harvey Hannah claims they are committed to the “environmental health of this area and our surrounding communities.” To prove it, they share outdoor air quality samples taken from the property’s fence line that show very low asbestos exposures. Unfortunately, there is often more public outcry (and larger fines) for breaking environmental laws than there are for breaking worker safety laws.

Fence line data may help put the public’s mind at ease, but outdoor samples taken hundreds of feet from demolition activities have nothing to do with the level of exposure workers may have faced in an enclosed space indoors. An ongoing federal OSHA investigation will determine whether the actions taken by this subcontractor also endangered the health of workers.

Every contractor says they care about the safety of workers and the environment during the bidding process. Their actions once they win the project and step on site speak more loudly. We urge all owners and general contractors to incorporate health and safety into the bidding process and recognize the value that LIUNA signatory contractors and highly skilled LIUNA members bring to the table.