We are in the middle of another deadly wildfire season on the West Coast. Across California, Washington and Oregon, millions of acres have been burned, thousands of people have been forced from their homes and air quality has been so poor at times that public health officials advised people to stay indoors. In some places, smoke got so thick that it turned the sky apocalyptic shades of orange and almost blocked out the sun. 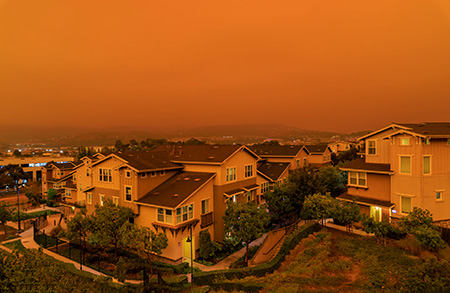 Far from being only a West Coast problem, smoke from these Western fires moved north to blanket British Columbia in a thick layer of smoke. Air quality was noticeably affected as far away as the East Coast of the U.S.

Air Quality Risk During the Pandemic

We’ve written about wildfire risks before in Lifelines, including the Cal/OSHA standard requiring employers to take action once the Air Quality Index (AQI) reaches 151 or higher. However, worsening air quality is now an even greater concern for outdoor workers and the general public due to the ongoing COVID-19 pandemic.

“Multiple studies have shown a correlation between higher levels of pollution in the air and greater spread and severity of COVID-19 cases,” says Dr. Brad Spellberg, chief medical officer of the Los Angeles County-USC Medical Center. “Some studies have also shown that exposure of lung tissue to pollution may increase susceptibility to viral infections.”

The increased risk for infection is mostly due to the irritation caused by inhaling the fine particles in wildfire smoke. Inflammation caused by these particles puts people at higher risk for lung infections. Another concern is that poor outdoor air quality will lead to more time indoors, where it’s more difficult to prevent the spread of the virus.

The fine particulate matter in wildfire smoke can aggravate existing respiratory issues or cause new respiratory issues to develop. Construction workers are at particularly high risk for exposure due to spending the majority of their working hours outdoors. 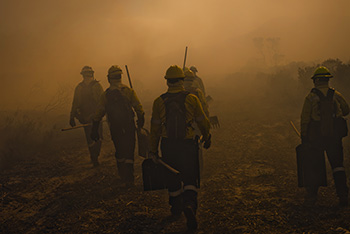 “Wildfire smoke can be challenging because employers don’t have direct control over conditions like they do with many other aspects of the worksite,” says Barry Nakahara, a spokesperson for WorkSafeBC. “But much like heat, there are things you can do to manage the workload. … Every risk that affects workers has to be managed and this one is no exception.”

When air quality worsens, one way for employers to protect workers from wildfire smoke is through the use of N95s, P100s or a similar respirator. The Fund’s previous article, “The Difference Between Dust Masks, N95s and Other Respirators” explains this topic in more detail. Employers in some locations may be able to take additional steps to protect workers by creating or designating a “clean air refuge” indoors. This involves closing windows, reducing outside air intake and using portable air cleaning units equipped with HEPA filters to filter indoor air. This measure follows the same principles for creating a clean room that the EPA suggests people use to maintain indoor air quality at home when wildfires are active.

Using N95s Instead of Facial Coverings

Construction workers and other outdoor workers who have been wearing facial coverings to help stop the spread of COVID-19 will need greater protection to avoid harmful inhalation of the fine particulates in wildfire smoke. 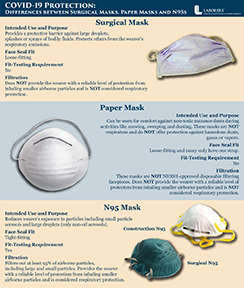 “The particles that cause problems to the lungs and airway with smoke are much too small to be filtered by a cloth mask or surgical mask,” says Dr. Jonathan Parsons, a pulmonologist at the Ohio State University Wexner Medical Center. “They are effective in terms of hindering the spread of COVID because the droplets are much larger relative to the particles that cause problems in smoke.”

The CDC does not recommend relying on cloth masks to protect against wildfire smoke exposure, even if they have filters inserted or sewn into them. Instead, workers need N95s or other respirators that provide equivalent or greater protection. Despite their widespread use as a source control, facial coverings are not respiratory protection or PPE and should not be used for that purpose. If N95s are not available (e.g., due to a production shortage), employers should provide greater protection in the form of P100s or elastomeric half-face respirators or stop work until that protection becomes available. Employers in California should consult Cal/OSHA’s temporary guidance, “Strategies for Optimizing the Supply of N95 Respirators for Wildfire Smoke Events During Respirator Shortages.”

Remember: respirators protect the wearer from the environment around them and face coverings protect others. Face coverings are effective in reducing the spread of COVID-19 because they control the dispersion of droplets coming from the mouth, but they are inadequate to protect workers from wildfire smoke and other harmful air contaminants. For more information on the difference between respiratory protection and source control, read this post from the NIOSH Science Blog.