Does Fracking Really Use Too Much Water?

Over the last several issues of Lifelines, we’ve taken a closer look at the controversial issue of hydraulic fracturing (better known as fracking). In May, the Fund examined how responsible drilling practices can make the process safer for workers and our environment, and then followed up by detailing how contractors can deal with potential flowback hazards.

“LIUNA believes that fracking can be done responsibly, limiting the impact on local communities and the environment,” says LIUNA General President Terry O’Sullivan. “Some are concerned that the process requires too much water. But when you actually look at the numbers, it becomes clear this just isn’t the case.”

A June 2015 EPA study – the same one that found no evidence of “widespread, systemic impacts on drinking water resources in the United States” – reported that fracking requires about 1.5 million gallons of water per well. That does sound like a lot of water, but that number can be misleading without perspective. The fact is that many other industries (such as manufacturing and agriculture) use much larger amounts of water on a regular basis. 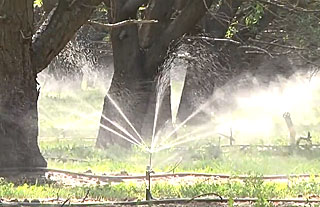 On the agriculture front, California’s ongoing drought has brought increased attention to water-intensive crops such as the almond. California produces 99 percent of the almonds in the U.S., but uses 10 percent of the state’s available water for this single crop. That’s 1.1 trillion gallons of water a year … just for almonds.

The number of active fracking wells in the U.S. is estimated at around 1.1 million, meaning all the fracking taking place in the entire country uses about 1.65 trillion gallons of water. Note that this figure is total water used over the life of these wells – not a recurring use each year like in agriculture and manufacturing. So for all the claims that fracking uses too much water, the amount being used by the industry isn’t far off from what the state of California requires each year to produce a single cash crop.

How Much Water Are You Using?

The fact is that just about every product we buy or consume takes water to make or grow – often a lot more than you might think. This is referred to as “virtual water,” and it adds up fast. The average American uses about 100 gallons of actual water every day and consumes products that take another 1980 gallons of virtual water to make. That puts the average American’s water footprint at about 750,000 gallons of water a year. That means in a single year, you and your average friend use about as much water as what’s needed for a single fracking well. For some examples of how much water it takes to make everyday items, see the “Know Your Water Use” sidebar.

Know Your Water Use

Here are a few examples of how much water it takes to make items we use and come across every day:

To get an idea of how much water you use, check out this water footprint calculator from National Geographic.

The Future of Water Use

As more people realize that fresh water is not an infinite resource, an increased focus is being given to using water more efficiently, especially when it comes to creating energy. Fortunately, natural gas fares very well in this category. According to the Virginia Water Resources group, it takes only ten gallons of water to extract enough natural gas to generate 1,000 kWh of electricity, while a coal-fired power plant delivering the same amount of energy would require about 140 gallons of water.

The LHSFNA’s Responsible Drilling: How Fracking Can Be Done Safely pamphlet provides more details on the potential hazards of fracking and how they can be overcome. This and other publications can be ordered through the Fund’s online Publications Catalogue or by contacting the Occupational Safety and Health Division at 202-628-5465.