E-cigarette users may soon be buying their favorite flavor of liquid nicotine in child- resistant wrapping and with exposure warning labels. 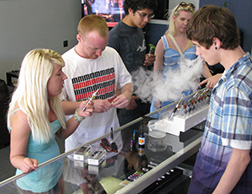 The Food and Drug Administration (FDA), whose oversight of tobacco products is expected to soon include e-cigarettes and other nicotine-delivering devices (see Lifelines, E-Cigarette Use in Teens at Center of Pending Legislation), is looking into implementing these requirements due to increasing reports of  children being sickened  after being exposed to liquid nicotine. A notice of proposed rulemaking posted on the agency website requests feedback on what regulatory actions the agency should take regarding packaging of e-liquids and other “novel tobacco products”. These include nicotine-infused strips, lotions and drinks. The public can submit comments through the end of this month.

Between January and May 31st, poison control centers fielded 1,499 calls related to liquid nicotine that was either swallowed, absorbed through the skin or splashed in the eyes. These exposures, the majority of which occurred in children, caused vomiting, nausea and eye irritation. In one instance last year, they were deadly: A New York toddler died after swallowing liquid nicotine that had been left on a table.

The American Association of Poison Control Centers says one teaspoon of liquid nicotine can be lethal for a child. The liquids, which when heated in e-cigarettes (electronic cigarettes), turn into vapors that users inhale, are often brightly colored and sweetened with flavorings that children find appealing. These include banana, bubble gum, cherry, chocolate and vanilla. 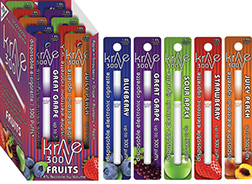 "What's attractive to kids: It's the smell. It's the scent. It's the color," Gaylord Lopez, director of the Georgia Poison Center told CNN.  "A kid's not going to know the difference between a poison and something they can drink."

The FDA currently regulates traditional cigarettes, smokeless tobacco and roll-your-own tobacco. In addition to e-cigarettes, the agency wants to expand jurisdiction to include cigars, pipe tobacco, certain dissolvables that are not “smokeless tobacco,” nicotine gels and waterpipe tobacco. The popularity of these products, especially e-cigarettes, is growing. Sales of the battery operated devices, currently estimated at $1.5 billion are expected to grow 24 percent annually through 2018.

Fans say e-cigarettes are safer to use than traditional cigarettes, because vaporized nicotine does not contain the more than 70 carcinogens found in tobacco smoke. While the jury is still out on the validity of this claim, there is no question that liquid nicotine can be very dangerous. As with all medications, it is imperative that liquid nicotine be kept out of sight and reach of curious youngsters. Adults should also use care to protect their skin when handling e-cigarettes and liquid nicotine.