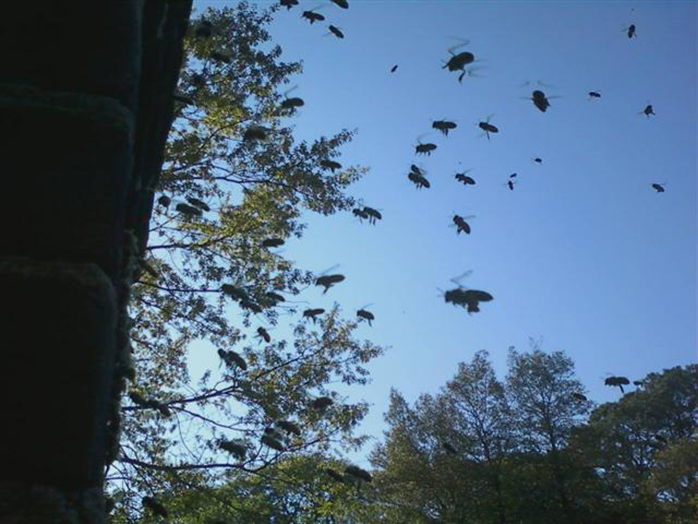 Work Safely Around Bees and Other Stinging Insects

A swarm of bees that attacked a construction crew in southern California last month, leaving one worker dead and two others hospitalized, is an example of how quickly a routine work day can turn tragic: Workers grading a site for a parking lot in the Los Angeles suburb of Riverside struck an underground sprinkler control vault that housed a beehive. A cloud of angry insects rose en masse, enveloping one worker and chasing those attempting to help him back to their cars. Work was halted until the bees were removed.

“Deaths caused by bees and other stinging insects are rare, but getting stung is not. Anyone who works outside is at increased risk, including our members on construction sites,” says LIUNA General Secretary-Treasurer and LHSFNA Labor Co-Chairman Armand E. Sabitoni. “A few weeks before this incident in California, a construction worker near Phoenix, Arizona was hospitalized after being stung more than 100 times.”

What Are the Symptoms of Anaphylaxis?

Benadryl (Diphenhydramine) calms anaphylaxis. It should be included in all first-aid kits.

Administer this medication at the first sign of anaphylaxis and call 911 immediately for further instructions.

These incidents underscore the importance of educating workers about stinging insects. Bees, hornets and wasps are found throughout the United States and Canada. Workers can reduce their chances for getting stung by knowing where these insects are likely to nest and either avoiding these areas or, if that’s not possible, alerting their supervisor so the nest can be safely removed by a professional pest control service. OSHA requires employers to train workers on the potential hazards caused by harmful insects and plants, including how to avoid injury and what first aid is needed if an incident does occur.

If workers do get stung, it’s important that they have access to appropriate first aid. Stings generally cause only minor discomfort. However, on occasion they can lead to a severe allergic reaction called anaphylaxis that requires emergency care and can be deadly. Stings and bites that require medical care beyond first aid must be recorded on the OSHA 300 log.

Hives and Nests Are Often Found:

Reduce Your Likelihood For Getting Stung:

If You Are Stung:

If You Know You Are Allergic:

Fortunately, bees and other stinging insects are usually not interested in attacking anyone unless they have been startled, so never swat at them or wave your arms. Let them fly away on their own. If you must walk, do so slowly. The only exception is if you have disturbed the nest and you hear lots of buzzing. In that case, cover your face with your hands and run.

Keeping the peace with bees and other stinging insects is possible and most of the time is not difficult. These bugs are not looking for a fight. When you know what to do and you don’t panic, chances are they will leave you alone.