Since OSHA finalized new injury reporting and electronic recordkeeping requirements in May, there have been plenty of headlines claiming that OSHA has “banned” incentive programs. This claim arises from a portion of the new rule, which states:

“You must not discharge or in any manner discriminate against any employee for reporting a work-related injury or illness.” (29 CFR 1904.35 (b)(iv)) 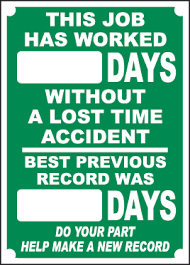 Even before the new rule, a 2012 memo made it clear that OSHA viewed incentive programs as having the potential to discourage reporting. It’s easy to see how workers could feel pressured not to report an injury if doing so would disqualify them or their coworkers from receiving a prize or other monetary benefit. OSHA even posted several examples from real employers of such programs on their website.

Does this new rule mean companies can no longer use incentive programs? Are companies going to get a citation just for having an incentive program? The short answer is no, and OSHA addressed this concern in the preamble to the new rule:

“OSHA does not intend the final rule to categorically ban all incentive programs. However, programs must be structured in such a way as to encourage safety in the workplace without discouraging the reporting of injuries and illnesses.”

The question employers must ask themselves is whether their current incentive program has the reasonable potential to discourage the reporting of injuries and illnesses. Incentives that would deny a benefit (such as inclusion in a raffle) or disqualify someone from a monetary bonus would clearly discourage reporting.

Instead of tying incentives to reporting injuries, employers could revise existing programs to tie them to positive safety behaviors, an idea that has clear support at OSHA:

“OSHA encourages incentive programs that promote worker participation. Such as identifying hazards or participating in investigations of injuries, incidents, or "near
misses.”

Other examples of incentivizing positive safety behaviors include:

Rewards in these revised incentive programs can still be monetary, but employers should also consider using recognition to reward employees. Appointing workers to the safety and health committee or commending them in front of their coworkers is another form of an acceptable incentive.

Even before this rule went into effect, many companies with strong safety programs had already realized that the non-reporting of injuries creates a false sense of safety. That’s because not reporting injuries means you have less information to prevent the next serious injury or fatality. Incentive programs that discourage reporting impair a company's ability to examine their injury and illness data to find the best areas to improve safety. So although OSHA has not banned all incentive programs, they did make some types of incentive programs illegal, which is why you can now get an OSHA citation for having one.