The only good news emerging from the nation’s battle to end an opioid abuse epidemic that has killed nearly half a million people is dubious at best: It’s getting easier to buy the antidote that can reverse an overdose. 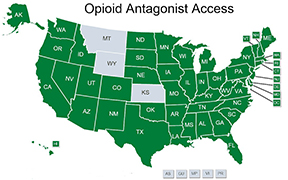 Since December of last year, the number of states that allow naloxone (Narcan) to be sold without a prescription has grown from 14 to 47. (The District of Columbia also allows naloxone to be sold without a prescription.) Naloxone can revive someone in the early stages of an opioid overdose, and the hope is that by removing this requirement, friends and family members will be more likely to have it on hand if a loved one overdoses on opioid medications or heroin. Naloxone, which is either sprayed in the nostrils or injected, can restore breathing within a few seconds and save a life.

In states where naloxone rules have been relaxed, major retailers carrying the antidote include CVS, Rite Aid, Target, Walgreens, Walmart and Kroger. It is also available at a number of independent drugstores. As of August, the only states that have not passed legislation to make naloxone more accessible are Kansas, Montana and Wyoming.

Naloxone may also soon be more accessible in Canada. Health Canada recently removed the antidote from the list of banned federal prescription drugs.

That means it’s now up to individual provinces and territories, many of which have been asking that naloxone be made available over-the-counter, to decide whether and how to implement it.

The changes in dispensing come as the number of deaths linked to opioids continue to climb. According to the Centers for Disease Control and Prevention (CDC), more people died from overdoses in 2014 than any year on record. Overdose deaths related to prescription pain relievers and heroin topped 28,000, with 78 deaths occurring every day. Half of these deaths involved a prescription opioid like oxycodone, hydrocodone or methadone. Opioids, both prescription and illegal, are also responsible for hundreds of thousands of non-fatal overdoses and costly health care expenses.

Naloxone’s increased accessibility is a good thing but it can be expensive, making it difficult for some people to obtain. The price can range from $75 to more than $3,000 leading two U.S. senators to write identical letters to five drug makers asking for explanations. 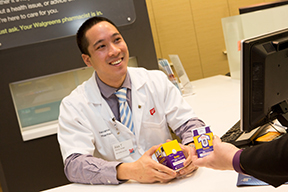 Customers also have to ask a pharmacist for naloxone from behind the counter. John Beckner of the National Community Pharmacists Association said this is for safety reasons. Instructions are provided with naloxone, but the added step of having to ask for it gives the pharmacist an opportunity to offer guidance to the person buying it and for that person to ask questions.

“You can’t treat it like an over-the-counter decongestant,” Beckner said. “It’s a powerful drug product that’s going to require some instruction on how to use it.”