Many critics of OSHA’s rule on respirable crystalline silica have claimed that it is “unworkable and infeasible.” Their concern is that the rule will be disruptive to businesses and end up costing jobs. As we get closer to the beginning of enforcement on September 23rd, here at the LHSFNA we are finding that the rule is disruptive, but not in the way many critics think. 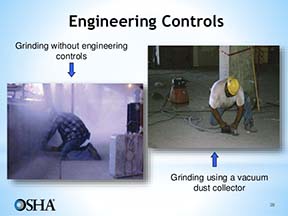 The disruption the rule is creating is positive because it’s leading to demand for major advances in dust control technology. A complimentary term in business and information technology circles, “disruptive innovation” refers to innovation that creates a new market, changes an existing market and eventually displaces old ways of doing things. Want some examples? Look no further than Netflix or that smartphone in your pocket.

This is exactly what’s happening with the new silica rule. The rule requires the use of engineering controls and work practices to reduce exposures below the permissible exposure limit (PEL) and provides direction on which types of controls are effective and preferred. This information provides manufacturers with targets that their tools have to reach in order to be used. In short, the rule incentivizes manufacturers to use safety to a competitive advantage. We no longer have to implore contractors to “buy safe” because toolmakers are beginning to promote and “sell safe” equipment that is less costly, more productive and OSHA-compliant right out of the box.

“The goal of the rule was to improve the health of construction workers by reducing exposure to harmful silica dust that’s known to cause lung cancer, silicosis, chronic obstructive pulmonary disease and kidney disease,” says LHSFNA Management Co-Chairman Noel C. Borck. “Now we are seeing the beginnings of other benefits as well, with new tools featuring built-in controls that can also increase productivity and create a better way of doing business.”

For example, in response to the rule, manufacturers like Hilti are now offering an entire suite of cutting, sawing, grinding, coring, drilling and demolition tools with easy-to-use integrated dust removal systems. Many of the tools also fit right into Table 1, which is OSHA’s preferred method of compliance. For tasks that fall outside Table 1, manufacturers are developing tools with other disruptive technology (like hammer drills with hollow bits) and supporting them with objective data that makes compliance much easier for contractors. 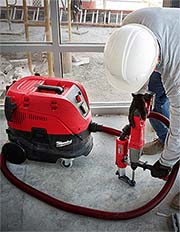 In addition to reducing harmful exposures for workers and making it easier for contractors to comply with the rule, tools with integrated controls also have the potential to increase productivity on the jobsite. One example is core drilling. During this task, workers often have to stop drilling to clean dust out of the hole – sometimes several times – before it can be plugged. With hollow drill bits and other dust removal technologies, these in-between steps are no longer necessary. That speeds up the drilling process and the amount of time spent cleaning up dust, all while protecting workers.

Other tool manufacturers are also getting involved. Milwaukee is now providing HAMMERVAC customers with objective data showing that users are below the PEL when using intrinsic control methods. Makita and Bosch, two of the largest tool manufacturers in construction, are also helping contractors with compliance by providing objective data with their tools and investing heavily in equipment that controls workplace dust exposures.

During OSHA’s silica hearings, the LHSFNA testified that, “OSHA’s forward-leaning proposal will create an environment wherein equipment manufacturers can aggressively develop and promote existing and new control technology.” At the time that testimony was given, there were fears about the rule being “technologically infeasible.” Three years later, the Fund’s comments are being proven true in the current marketplace.

The LHSFNA looks forward to seeing what other technological advances will be developed as a direct result of OSHA’s new silica rule. Advancements that protect workers and make compliance easier for contractors and owners benefit everyone involved and can help drive continued partnerships between labor and management.