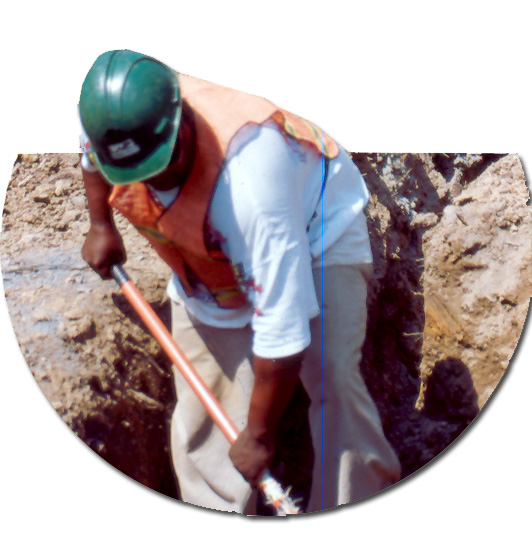 Trench fatalities are a serious problem in construction.  Bureau of Labor Statistics data show that about 25 workers are killed each year in trench-related mishaps.  Cave-ins cause about three out of every four fatalities; the remainder are commonly due to struck-bys or electrocutions.

In 2003, the nation experienced a spike in trench fatalities (53, according to preliminary data, later reduced to 48), inviting a detailed OSHA investigation which highlighted important facts about trench dangers.  Following its investigation, OSHA undertook a national emphasis campaign, distributing more information about trench hazards and stepping up enforcement.  As a result, annual trench fatalities declined.

The results of OSHA’s 2003 investigation are still useful in understanding why trench fatalities occur and how they can be avoided.  The main reason trenches collapse is that they are not properly protected.  Protective systems were properly employed in only 24 percent of the trenches.  In the remainder, a protective system was either improperly used (24%), available but not in use (12%) or simply unavailable (64%).

Also, a disproportionate number of fatalities (36%) occurred on Mondays, probably because rain or other factors changed conditions over the weekend.  Under OSHA regulations, the competent person must inspect trench work in progress before each shift and after any changes in conditions.

The OSHA investigations showed that schedule time was more important than safety in 88 percent of the incidents. Seventy-two percent of the fatalities occurred in trenches less than nine feet deep.  Only nine percent occurred deeper than 15 feet.

The most commonly killed employees were construction laborers (53%), with plumbers and pipe fitters following next at nine percent.  Most (58%) were killed while installing pipe.

Fifty-six percent of these fatalities were Hispanics, and 52 percent were foreign-born.  For 44 percent, Spanish was their primary language.  At least 30 percent had been working for their employer for less than a year, and most (59%) worked for a subcontractor.

Only six percent were union members.  Since, nationwide, about 20 percent of construction work is union, the expected rate of union fatalities would be near 20 percent.  The lower rate suggests that union jobs are safer, that supervisors and workers on union sites are better trained and that the union offers the kind of protection that workers need to speak up about safety issues on the worksite.

Just over half the employers had a written safety and health program, but, of these, only 40 percent covered trenching.  Sixty-five percent provided no trench safety training.  Most employers (71%) had never been inspected by OSHA, but 21 percent had been previously cited by OSHA for trench safety violations.

About three in every four fatalities occurred at residential worksites.  Most companies were small; 42 percent had fewer than ten employees.  Though, typically, five or less workers were present on the site when the incident occurred, most of the projects (52%) involved contracts worth $100,000 or more.

Although trench and excavation work can be very dangerous, injuries and fatalities are completely preventable.  For LIUNA signatory contractors that participate in the LHSFNA, the OSH Division can provide assistance in the development and implementation of trench safety programs. For help, call the OSH Division.

Dealing with Those Cold Weather Aches and Pains
Are Construction Workers at Higher Risk for COVID-19 Complications?
August 2020
Developing and Implementing Tobacco-Free Worksite Policies
Judgment Can Be Hazardous to Someone Else’s Health
LHSFNA Plays Critical Role in First-in-Nation COVID-19 Standard
Message from the Co-Chairmen: Uniting for the Health and Safety of Workers and Their Families
OSHA’s Silica Directive Illustrates Current Compliance Landscape
Preventing Injuries Through Safety Equipment Grants
Wearing a Face Mask Isn’t Too Big a Sacrifice
Coronavirus & COVID-19 Resources
Assessing COVID-19 Risk When There's No Clear Answer
An Honest Conversation on Racism and Public Health
COVID-19’s Disproportionate Impact Across Racial Lines
Avoiding Heat Illness Risks Due to Facial Coverings
Industry Groups Attempt to Use COVID-19 to Weaken Wildfire Smoke Rule
July 2020
Staying on Top of Your Health Without Health Fairs
The Battle for an Emergency Temporary Standard to Address COVID-19
Recruiting and Retaining Women in Construction in Canada

The category Trench Resource List doesn't have a corresponding categoryID