By: Wellness Councils of America

The alarming increase over the past two decades in the number of overweight and obese adults and children in the United States and Canada is a well-documented fact. For instance, the data show that 61 percent of all American adults are overweight, along with 13-14 percent of all children over six. Projections indicate that by 2040, 85 to 95 percent of the U.S. population will be overweight.

All of these problems can cause painful suffering and, in some cases, death. All are costly to treat. The current annual health care bill for weight-related illness in the U.S. is $93 billion. The average annual bill for an obese person is about 40 percent higher than for a person of healthy weight. 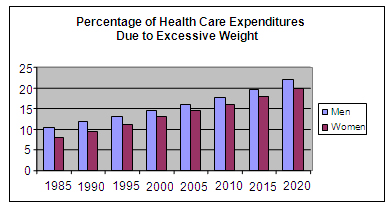 Over the last three years, a broad effort to reverse the tidal wave of obesity has emerged, promoted by a wide array of private and public health organizations. For those who want more information on the epidemic, a partial list of web resources is noted below.

America on the Move

Centers for Disease Control and Prevention

Institute on the Costs and Health Effects of Obesity

North American Association for the Study of Obesity