Is It Really Possible to Change Your Habits?

Habits are often associated with deep cravings and, sometimes, with physical addictions.

“Yet, habits aren’t destiny,” New York Times reporter Charles Duhigg argues in The Power of Habit.” [They] can be ignored, changed, or replaced. But…unless you deliberately fight a habit – unless you find new routines – the pattern will unfold automatically.”

As reported by Duhigg, scientists now understand that memory is managed by the brain’s basal ganglia, a small knot of tissues at the center of the head near the brainstem.

One key way the basal ganglia allow the brain to be effective and efficient is through habit formation. When you encounter a new situation, your brain works hard to assess the situation and respond appropriately. It then monitors your progress and notes the result. If you repeatedly react to the same situation with acceptable outcomes, your brain gradually forms a habit. Henceforth, instead of thinking hard about how to manage this situation, the brain simply and unthinkingly invokes the habit.

“Left to its own devices,” says Duhigg, “the brain will try to make almost any routine into a habit, because habits allow our minds to ramp down more often.”

While conserving brain energy, however, habits would be dangerous if they were invoked in the wrong situations. So the brain kicks into habit mode only after it energetically examines each encountered situation to see if it contains a cue or trigger for one of the brain’s stored habits. If not, the situation is treated as unique, and the brain stays active and focused. But if a cue is found, the brain launches the associated habit, and you act without further thinking. At the end of the routine, the brain reawakens, checking that everything unfolded as expected and acknowledging the reward of your successful action. You feel satisfied.

To change a habit, it is necessary to identify its components: its Cue à Routine à Reward loop. What sparks your habit, what do you do and what is your reward for doing it?

You’re probably most aware of the routine of your habit. But a closer examination may add important detail. Duhigg writes of trying to break a habit (while he was researching his book) of going to the cafeteria every afternoon and eating a cookie. He’d gained eight pounds. Upon examination, he found his habit consisted of getting up from his desk in the afternoon, walking to the cafeteria, buying a cookie and eating it while chatting with co-workers. That was the routine.

He then thought about the rewards. What did he get out of this routine? “Rewards are powerful because they satisfy cravings,” he writes. To investigate cravings, it is useful to experiment with different rewards, and this takes time. He tried skipping the trip to the cafeteria and going for a walk instead. He tried buying a candy bar but returning to his desk to eat it. Then, he went to the cafeteria but bought an apple and ate it with his friends. He also tried skipping the cafeteria entirely while, nevertheless, getting up from his desk and gossiping for a few minutes with a co-worker. Immediately after each experiment, he made notes of how he felt. He also set a watch alarm so that he could record how he felt 15 minutes later. The point is to discover the real motivation for your behavior. Duhigg discovered that it wasn’t the cookie but the socializing that actually provided satisfaction, soothing his craving.

The next step is to identify the cue that sparks the routine. This is important because, otherwise, your habits can direct your actions without your conscious assent. Isolating the actual trigger amid the complex swirl of potential stimulants can be difficult, but psychologists have identified some important questions to ask (see chart below). Duhigg found his habit was sparked by mid-afternoon tedium.

With the cue and reward clarified, it is possible to make a plan to change your habit. Devise a new routine to replace the old one when the cue occurs, a routine that will achieve your desired reward. Then, discipline yourself to implement the plan for as long as it takes to remold your brain’s habitual response. Duhigg made a plan to get up and go chat with a colleague when the urge for a cafeteria cookie arose. After a few weeks, the new habit was completely ingrained, and he started losing weight.

“Obviously,” writes Duhigg, “changing some habits can be more difficult [than others]. But this framework is the place to start. Sometimes change takes a long time. Sometimes it requires repeated experiments and failures. But once you understand how a habit operates – once you diagnose the cue, the routine and the reward – you gain power over it.” 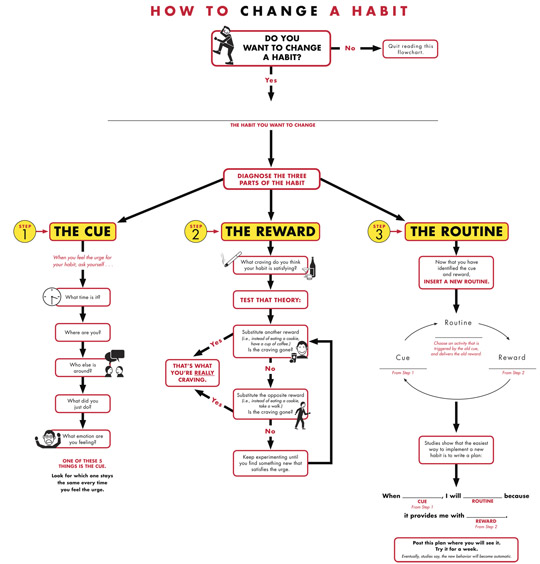