Is Your Soda Habit a Risk to Your Health?

Looking like a picture of health does not necessarily mean that you are, especially if soft drinks are your main source of hydration. 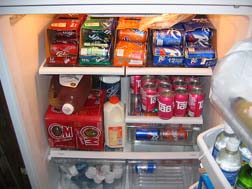 The American Beverage Association(ABA), a trade organization representing manufacturers and distributors of non-alcoholic beverages in the United States, disputes the findings, but two new studies indicate that soft drink consumption – diet and regular – is harmful to vascular health.

Carbonated soft drinks are the favorite beverage in the U.S., three times more popular than bottled water, milk or coffee. Every day, the average American consumes at least two cans worth of flavored fizz. Regular Coke is the drink of choice with Diet Coke coming in at number two. The other top drinks are Pepsi, Mountain Dew, Dr. Pepper, Sprite, Diet Pepsi, Diet Mountain Dew, Diet Dr. Pepper and Fanta.

In addition to weight gain and tooth decay, consumers of regular soft drinks and other sugary beverages could be at increased risk for high blood pressure. A study of more than 2,600 participants found elevated blood pressure levels among those who consumed large amounts of glucose and fructose, the added sugars in high fructose corn syrup, a common sweetener in regular soda and other manufactured foods.

According to the American Heart Association (AHA), added sugar consumption should be no more than six teaspoonfuls a day for women and no more than nine for men. However, most Americans consume at least 22teaspoonfuls every day, and most of this overload comes from drinking regular soda and other sweetened beverages.

If your trim appearance has anything to do with drinking diet soft drinks, you could be at increased risk for heart attack and stroke. In a study that followed more than 2,500 participants for nine years, researchers found that, when compared to occasional drinkers, non-drinkers and even daily drinkers of regular soda, those who drank diet soda every day were 48 to 61 percent more likely to suffer one of these vascular events. Metabolic syndrome – more than one cardiovascular risk like high blood pressure, high cholesterol and extra abdominal fat – and pre-existing heart disease were taken into account by one model. The other made no such accommodations.

The range is due to the use of two statistical models.  Age, sex, smoking habits, physical activity, alcohol and calorie consumption, whether or not participants had metabolic syndrome – more than one cardiovascular risk like high blood pressure, high cholesterol and extra abdominal fat – and pre-existing heart disease were taken into account by one model. The other made no such accommodations.

The study was presented at the American Stroke Association’s International Conference in February and, for now, researchers have no explanation for the findings. Pending a peer review, the information is considered preliminary.

The Other Side’s Story

The ABA denies a soft drink consumption connection to poor vascular health. Asserting for example, that the diet soda study did not consider factors like family history of stroke and weight gain, Maureen Storey, senior vice president of science policy at the ABA, says, “Scientific evidence does show that diet drinks can be a useful weight management tool, a position supported by the American Dietetic Association. Thus, to suggest that they are harmful…does a disservice to those trying to lose weight or maintain a healthy weight.”

Regarding regular soda and high blood pressure, Storey says researchers “failed to control for other critical variables,” potassium and sodium in the foods participants ate, for example.

“When it comes to cardiovascular disease risk, there is nothing unique about the calories from added sugars, which has been confirmed by the Institute of Medicine,” Storey says. “According to the American Heart Association, the major risk factors for heart disease are increasing age, gender (being male), genetics (including race),smoking and being obese. If we truly want to reduce the incidence of hypertension and heart disease, health professionals as well as other stakeholders must educate Americans about the risk factors and encourage people to maintain a healthy weight by balancing calories consumed – which include eating a sensible, balanced diet – with calories burned by engaging in regular physical activity.”

In other words, a critic might say, “Drink all the soda you want.  Just make sure you exercise enough to burn off those calories.If you do the work, your health will take care of itself.”

Regular or diet, soda is nothing more than liquid candy.  Like all sweets, it should be consumed in moderation. If you trade some of your soda consumption for water, you will find that you are healthier and that when you do have soda, you will enjoy it more. Instead of indulging a habit, you will be having a treat and treats always taste better.