Joseph C. Fowler, Jr. — an Officer, a Gentleman and a Laborer 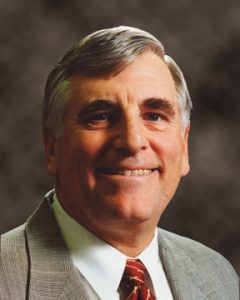 An Officer, a Gentleman and a Laborer

A graduate of the United States Military Academy at West Point, Joe’s leadership style was both natural and well-honed. He was conscientious and committed. He kept the larger picture in mind. He encouraged his “troops,” recognizing, acknowledging and utilizing e potential. His door was always open; his concern – both professional and personal – was always sincere. You didn’t work for Joe, you worked with Joe.

Joe came to the Laborers’ Health and Safety Fund of North America (LHSFNA) in 1994, after a 26-year career in the United States Army. After graduating from West Point, he went on to obtain a law degree and have a distinguished career as a JAG officer. He came to the LHSFNA as the Fund’s Assistant Executive Director in 1994, and when the top job became available, he was tapped to fill the void.

And fill it he did. Over more than 15 years, Joe built the Fund into one of the nation’s most powerful and persistent voices for workers’ safety and health. Joe understood the meaning of life and family and the importance of every worker returning every day, safe and sound, to their family and home. Steadily, he mastered the nuances of the construction industry, as well as other groups represented by LIUNA, building the Fund into one of the construction industry’s premier safety and health advocates. Through the long years of the previous Administration’s animosity toward OSHA and its mission, Joe kept the Fund on the front line, battling for workplace safety, first and foremost in construction but in other LIUNA realms as well.

For Joe, occupational safety and health and health promotion became personal passions and a vital social mission. His work at the Fund was his way of “giving back,” of continuing his service to God and Country that is the long measure of his life. Alongside his own family, Joe placed the health and security of Laborers and their families at the top of his agenda.

Joe also found a way to reach across divides and forge unity. His work ethic and broad perspective seemed emblematic of the labor-management cooperation that is the core philosophy and practice of the LHSFNA. As he traveled the United States and Canada speaking on behalf of the Fund and its mission, he drew local unions and contractors into collaborative endeavors, moving the Fund’s vision into practical partnerships.

Joe’s love of life found particular expression in his passion for golf, Notre Dame football, Army sports and birthdays. If you played golf with Joe, you loved his positive encouragement when the ball veered into uncharted territory, his relaxed way of enjoying nature – sunshine or rain – and his constant tinkering to improve his game.

When fall rolled around, golf took a backseat if it interfered with a Notre Dame football game. Joe may have been one of the Fighting Irish’s biggest fans – a loyalty imbued through a Catholic childhood and a corollary of his devout involvement with St. John the Evangelist Roman Catholic Church. The only time he was conflicted about which team to cheer for was when Army played Notre Dame.

A member of the church choir, Joe was always ready to serenade the members of his staff with a rousing version of “Happy Birthday.” In fact, he was the first one in your office on your birthday to give you a personal rendition and led the group in the afternoon when he gathered the staff for cake.

As a testament to Joe’s life and service, more than 600 friends gathered with his family on November 11th, Veterans’ Day, for a funeral Mass to celebrate his remarkable life. Joe, along with his family and close friends, then made his final journey to his beloved West Point to rest in honor.

And when our work is done,

Our course on earth is run,

May it be said, “Well done;

Be thou at peace.”