OSHA’s recent update to its Walking-Working Surfaces standard for general industry didn’t get much attention when it was released. That might be because it’s not going to cause sweeping changes like the new silica standard and isn’t generating controversy like the agency’s recent recordkeeping rule.

But instead of being largely ignored, these changes should be celebrated for the increased safety and other benefits they will bring to 112 million workers at more than seven million worksites across the U.S. Year after year, falls continue to rank as one of the leading causes of worker deaths and injuries.

“Many of LIUNA’s half-million members work every day in jobs other than construction,” says LIUNA General President Terry O’Sullivan. “These workers deserve the same stringent fall protection measures that have been in place in the construction industry for years.”

The updated standard applies to slip, trip and fall hazards from both heights and from the same level. Although most serious injuries and fatalities are caused by falls from heights, falls at the same level can still lead to serious injuries. Even minor injuries from slips, trips and falls cause thousands of workers to miss work each year. These injuries can also have a serious impact on insurance costs. Liberty Mutual’s 2016 Workplace Safety Index estimates the cost of falls at almost $16 billion a year. 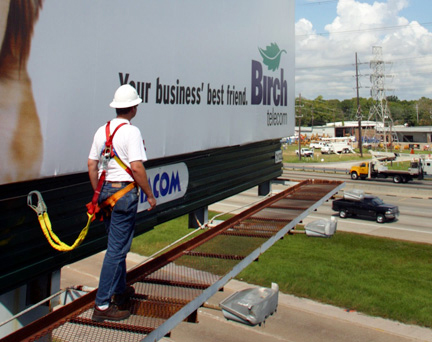 This change will allow employers to choose the fall protection method that’s best for a particular situation, which is how fall protection has worked in the construction industry for over 20 years. During that span, responsible employers have proven that there are many different ways to protect workers from falls.

The rule also includes updated personal protective equipment (PPE) standards for fall protection systems. Other changes include allowing employers to use rope descent systems up to 300 feet above a lower level, prohibiting the use of body belts as part of personal fall arrest systems and requiring worker training on personal fall protection systems and equipment. Lastly, the new rule updates requirements for ladders, stairs, dockboards and protecting against falls and falling objects.

Increasing flexibility for employers is becoming a bit of a trend at OSHA recently, which also offered construction contractors several compliance options in its updated silica rule. These changes also increase the consistency between fall protection standards in general industry and construction, lessening confusion for workers and making life easier for employers who work in both industries.

OSHA estimates the changes will prevent 29 fatalities and more than 5,800 injuries each year. This is a step in the right direction, but there is still plenty of room for improvement. Data from the Bureau of Labor Statistics shows that the rate for falls, slips and trips is slowly decreasing, but these injuries still made up 27 percent of the total number of occupational injuries and illnesses in 2015. That’s over 300,000 injuries to workers in the general and construction industries.

The numbers above don’t include bystanders who get injured in these incidents or the impact on workers’ family members. Stronger fall protection standards should also benefit LIUNA members and their families off the job by making businesses and public areas safer places to spend time and do business.

Everyday Equipment Shouldn’t Be a Killer

The National Safety Stand-Down, held the first week of May, is a nationw...

Protecting Workers During All Aspects of a Fall

5 Ways to Stand Down for Falls This…

Every day, Laborers across the United States and Canada perform a variet...