Founded in 1988, the Laborers’ Health and Safety Fund of North America has advanced through 20 challenging years of diverse and evolving work, fighting for safety on the job and promoting healthy lifestyles for Laborers and their families at home. By taking initiative, building networks, gaining influence and scoring impressive gains in some key areas, the Fund has emerged as a leader in its field, ready to make the most out of new opportunities in the decades ahead. 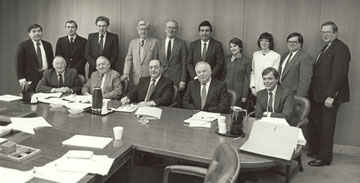 The Fund was established with two clear goals in mind:

First, the founders wanted the Fund to investigate the causes and implications of the growing health care cost crisis and come up with ways that LIUNA’s health and welfare funds could avoid the trend and survive the crisis. At the time, few observers would have thought it likely that we would still face the cost crisis 20 years later.

Second, the founders wanted to harness the nation’s awakened interest in improved workplace safety and health and focus it on the particular needs of Laborers. Looking back, we now know that a recalcitrant Congress would soon bottle up that interest, and the Fund would spend much of its first 20 years fighting to keep occupational safety and health visible in the nation’s agenda.

Remarkably, however, as we celebrate the Fund’s 20th anniversary this year, the United States finds itself in the midst of an election in which health care reform and restoring bi-partisan problem-solving in Washington are top priorities for the American electorate. Satisfied with our progress to date but especially optimistic about the potential ahead, the Fund joins the rest of America in anticipating the outcome in November.

Through a variety of grants early in its history, the Fund conducted the first comprehensive research into the actual causes of death and injury for Laborers, whether on the job or in retirement. Among the discoveries were the large number of Laborers suffering from asbestosis, the wide extent of hearing loss, the extraordinarily high percentage of smoking Laborers and the surprising number injured in highway work zones, not by crashing motorists but by backing dump trucks. These and other early assessments helped identify a focus for many LHSFNA programs that remain in effect to this day. In tackling these problems, the Fund has helped signatory employers compete more effectively with non-union rivals.

As was the case 20 years ago, LIUNA members and their families receive health care today through the benefit plans of more than 100 health and welfare funds that are jointly-managed by the union and employer trustees.

After decades of relative stability in the aftermath of World War II, the American health care system of the 1980s began to suffer from sharply rising costs. As costs escalated, the LIUNA health and welfare funds faced the prospect of cutting benefits or devoting a greater portion of negotiated compensation packages to health care rather than to wages.

Impacts of rising costs were not confined to the Laborers and their funds. The problem was so rampant that health care reform became a major issue in the 1992 American elections. However, the reform plan proposed by the Clinton Administration met a wall of resistance. Nothing got done and costs continued to soar. Indeed, today, the trend is as pronounced as ever. In the meantime, however, the Fund’s efforts have helped keep LIUNA’s end of the system intact and fully functional.

To help reduce administrative costs, the Fund works steadily with health and welfare funds to revise benefits plans, issue RFPs, conduct trustee education, assess merger options and improve customer service. It helped the funds comply with HIPAA (the Health Insurance Portability and Accountability Act). The LaboreRx program pools the buying power of individual funds to achieve lower prices on pharmaceuticals. The Fund’s guidance helped create the nation’s first union-based member assistance program and today supports dozens of MAPs across the U.S. and Canada. In addition, a host of wellness programs – Sun Sense Skin Cancer Prevention, tobacco cessation, drug and alcohol abuse prevention, nutrition and fitness – help Laborers and their families be personally healthier, and these programs are augmented and promoted through the Fund’s support of hundreds of annual health fairs.

Meanwhile, however, the cost of care – driven by new drugs and health technologies as well as the profit drives of the insurance, pharmaceutical and hospital industries – continues its steady rise. Excellent care is available, if only one has the money to pay for it. Unfortunately, about one in seven Americans goes without health insurance of any type. Because union employers generally provide coverage, the union sector ends up paying more than its fair share of the nation’s health care bill.

In Canada, which has a national health program of care paid from tax dollars, the increasing cost of care does not result in an uninsured population. Rather, the rising cost of care restricts availability of services and could cause restructuring of service options in the years ahead.

After more than 20 years of steadily rising health care costs, no one says that the problem can soon be resolved.   For our Fund, the twin battle – to improve wellness and manage costs – will set the agenda for the foreseeable future.

If you’re old enough to remember Owens Corning, Love Canal and Karen Silkwood, you may remember that the 1970s and 80s were marked by a riveting series of media exposures of toxic dangers in America. Around the time that the Fund was created, it seemed likely that real advances in workplace safety and health regulation might be in the works.

It didn’t turn out that way. Like the health care reform agenda of the early 1990s, OSHA’s mounting interest in proactive workplace safety regulation was thwarted by resistant business interests, and the Fund has had to pursue this cause largely without government support.

Nevertheless, the progress is significant. Working with LIUNA signatory contractors, the Fund intervened in a variety of specific situations to find solutions to complex protection problems. The first was the Exxon Valdez oil spill, but the safety of hazardous waste clean-up has remained a Fund focus right up through the clean-up at Ground Zero. More generally, the Fund helps employers develop and implement company and site-specific safety programs, trains company safety officers and supervisors and finds ways to minimize workers’ compensation expense.

Seeking safety interventions with the greatest potential impacts, the Fund forged an agreement with paving machine manufacturers to install ventilation controls on all new pavers that limit worker exposure to asphalt fumes. Similarly, it helped the American National Standards Institute (ANSI) adopt voluntary standards to protect hearing and curtail sprain and strain injuries, and it guided a broad partnership to develop the highly popular, innovative Roadway Safety Program.  Today, it is working on new initiatives in trench safety, sprains and strains and safety in design.

Despite the sustained efforts of the Fund, however, occupational safety and health has only just held its own through the last 20 years. A stronger and more consistent effort from government is required to raise the nation to higher job safety standards and lower the large number of unnecessary injuries, illnesses and fatalities that occur at work.

Twenty years of hard, dedicated, professional work has made the Fund one of the largest and best-respected health promotion and job safety organizations in the U.S. and Canada. “Nothing in life and work is more fundamental than health and safety, and the union sector leads in these vital areas,” says Noel C. Borck, who has served as a management trustee since the Fund’s inception and as Management Co-Chairman for the past eight years. “We appreciate the opportunity we’ve had to make a difference for Laborers, their families, our signatory employers and the LIUNA health and welfare funds in these first 20 years. With LIUNA’s continued support, the next 20 will be just as productive.”