When most people think of the health hazards caused by occupational dust, respiratory illnesses like silicosis, chronic obstructive pulmonary disorder and asthma are often what come to mind. However, these are not the only risks that workers can face when dust is in the workplace.

Some dusts, including some of the nuisance dusts often found on worksites, are also combustible dusts. Under certain circumstances, like exposure to sparking or friction-generating equipment or when an accumulation of dust causes spontaneous heat, these tiny particles, chips, flakes and fibers can ignite. In the right conditions, these dusts can also explode when airborne. This can occur even with materials that do not burn in larger pieces, such as aluminum and iron. Confined spaces and enclosed areas where dust can collect (e.g., ductwork and hard-to-service machinery parts) are common spots for hazardous buildups.

Whether inside a factory, warehouse or construction site, preventing the buildup of combustible dusts is essential for worker safety.

“Protecting workers from combustible dust is another reason why the hierarchy of controls is so important,” says LHSFNA Management Co-Chairman Noel C. Borck. “The very same work practices that help protect workers from respiratory illness, like ventilation, wet processes, vacuuming and housekeeping, can also prevent combustible dust from accumulating to hazardous levels, where it could catch fire or explode.”

We usually only hear about combustible dust when it causes a catastrophe, such as the Imperial Sugar refinery dust explosion and fire in Port Wentworth, Georgia, that killed 14 workers and injured 36 others in 2008. However, fires and explosions linked to combustible dust are not unusual. A study from the Combustible Dust Policy Institute found that in a given year, more than 500 combustible dust-related fires and explosions were reported in a variety of industries. The majority of these incidents were classified as near misses and since there was no loss of life, they did not generate a lot of publicity. However, as we’ve previously reported in Lifelines, most accidents are preceded by at least one near miss or close call. Without improvements in work practices, workplaces that experience a nonfatal combustible dust event are at risk for a repeat with more serious consequences.

How Much Dust Is Too Much? 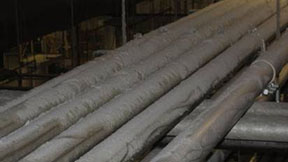 For health and safety reasons, dust should never be allowed to build up. Although safety advocates are lobbying for a comprehensive rule to prevent these disasters from happening in the first place, OSHA does not currently have any combustible dust standard. However, in accordance with the National Fire Protection Association, OSHA developed its Combustible Dust National Emphasis Program, which recommends not letting dust accumulate to more than 1/32 of an inch (about the thickness of a dime or paper clip) over more than five percent of a work area. Areas where combustible dust is likely to accumulate in a work space include roof beams, the tops of pipes and other horizontal areas. To reduce the risk for hazardous accumulations, employers should conduct regular inspections not only of these areas but also of equipment used or stored near these areas.

Is Your Dust Combustible?

The National Fire Protection Association’s NFPA 652: Standard on the Fundamentals of Combustible Dust suggests that workplaces that create or collect any kind of potentially combustible dust have it tested and keep the information on file. Although this NFPA standard is voluntary, OSHA can reference it and other NFPA standards as part of its general duty clause. It may not be possible to keep combustible dust out of the worksite, but when you know it’s there, you can take the necessary steps to manage it and keep employees safe. 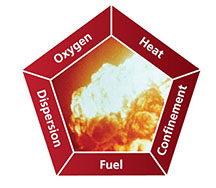 OSHA lists more than a hundred combustible dusts. They can be organic, inorganic or sometimes a combination of the two. Types of combustible dusts include those consisting of wood, metal, coal, plastic, soap, paper, agricultural processing byproducts and some textile products. For them to catch fire and explode, five elements – the “Dust Explosion Pentagon” – must be present.

4. Dispersion of dust particles in sufficient quantity and concentration

5. Confinement of the dust cloud