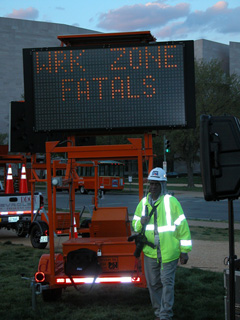 Stressing the particular dangers in the increasing use of nighttime highway work zones, the Federal Highway Administration and its partners opened National Work Zone Safety Awareness Week last month with a photo op on the National Mall.

Among the displays were electronic message boards and other equipment commonly deployed to manage traffic flow around work zones. Also on display was the National Work Zone Memorial, which lists the names of workers, pedestrians, law enforcement personnel and children who have been killed in work zone accidents. The Memorial was developed by the American Traffic Safety Services Association, the manufacturers and purveyors of traffic control products.

In addition, the sponsors of the media event set up traffic cones in a visual representation of the annual carnage in work zones. Each year in the U.S., about 1,000 people are killed in work zone incidents. About ten percent are workers.