Massachusetts just became the 26th state to expand OSHA protections to public employees. The Act to Further Define Standards of Employee Safety, signed into law by Governor Charlie Baker on March 9, will cover almost 430,000 public sector and municipal workers in the state, including many LIUNA members.

“This law should help improve the safety and health of thousands of hardworking LIUNA members in Massachusetts,” says LIUNA General Secretary-Treasurer, New England Regional Manager and LHSFNA Labor Co-Chairman Armand E. Sabitoni. “There is no reason public sector workers should be exempt from OSHA protections. This law puts all workers in Massachusetts on equal footing, which is exactly what they deserve.”

Previously, Massachusetts public employees working in municipalities, higher education and semi-public agencies like the Water Resources Authority were not guaranteed the same workplace protections and rights as workers in the private sector. This left public agencies without clear guidance on how they should be protecting workers and left workers with fewer options if they were faced with dangerous working conditions. There’s plenty of evidence that this lack of oversight put workers at risk.

For example, thousands of municipal employees in Massachusetts have suffered injuries in recent years that are serious enough to put them out of work. Others were killed on the job, like Warren Cowles, who was plowing snow for Longmeadow’s Department of Public Works when his truck was struck by an Amtrak train. Testimony given in support of the law included many examples of dangerous situations that could have been avoided if OSHA regulations applied and were being followed. One such example included an OSHA inspector who found city workers repairing a water pipe without a trench box. The workers’ supervisor, aware that OSHA regulations didn’t apply to these workers, refused to evacuate them. In all of these instances, the state’s OSHA program was unable to investigate, impose fines or require corrective action that could have protected workers in the future.

To help close this safety gap, LIUNA and its affiliates in the New England Region made it a regular practice to collectively bargain for contract language that mirrored OSHA safety and health regulations, effectively compelling compliance with federal OSHA. Even with these additional requirements in place, labor unions and groups like the Massachusetts Coalition for Occupational Safety and Health (MassCOSH) continued to be strong advocates for this law.

Scheduled to go into effect in February of 2019, the new law will also create an OSHA advisory board that will evaluate injury and illness data, recommend training, monitor the effectiveness of safety standards and determine if other resources are needed. In the region, Massachusetts joins Connecticut, Vermont and Maine as states that extend OSHA protections to public sector workers, and more states are moving towards this benchmark. Advocates in New Hampshire, Ohio and Pennsylvania are working hard to pass similar bills. Laws like these are necessary because OSHA programs vary from state to state and don’t always cover public employees by default.

All workers should have the benefit of showing up every day to a safe workplace, regardless of whether they’re employed by the state or the private sector. An unshored trench is just as dangerous for a municipal worker as it is for an employee of a private contractor. Thankfully, these two employees will now be guaranteed the same rights to a safe and healthy workplace under Massachusetts law. 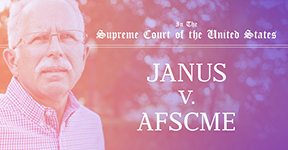 While this law is a positive step forward for workers in Massachusetts, public sector workers across the U.S. are facing the Supreme Court’s looming decision on Janus v. AFSCME Council 31. This case has the potential to permanently weaken public employee unions. If the case is decided as most experts think it will be, non-union public sector workers will soon be able to reap the benefits of collective bargaining without having to pay for that representation. Currently, non-union public sector workers pay a fee to the union because they still benefit when unions negotiate for improved pay, work conditions or other benefits. The Janus case is likely to make it illegal for unions to require those fees. That would create a powerful incentive for more workers to become so-called “free riders” and would force unions to spend time and money negotiating on behalf of workers they don’t represent. The Supreme Court is expected to issue its decision on this case in June.