Minimize the Risks of Methylene Chloride “The problem with methylene chloride is so serious that OSHA has issued a Hazard Alert for bathtub refinishers, but the solvent is used in many renovation projects so employers and workers in all of the building trades should take heed,” says Borck.

Heavier than air, DCM vapors can fill a bathtub and, eventually, the lower levels of an enclosed bathroom. If inhaled in sufficient quantities, they form carbon monoxide in the blood, inhibiting the body’s ability to transport oxygen. Victims suffocate. 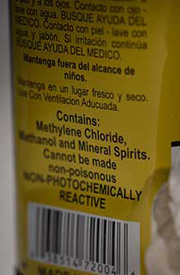 Whenever possible, alternatives to methylene chloride – benzyl alcohol based strippers or sanding, for example – should be used. If options are not available, engineering and work practice controls and PPE can reduce the risk of exposure, serious injury and death.

Methylene chloride is found in many remodeling products including paint strippers, metal cleaners and degreasers. It is also an ingredient in a number of aerosols, pesticides, spray paints and some household products such as spray shoe polish, spot removers and water repellants. Workers and consumers are exposed when they inhale the vapors, when they absorb it through their skin or when it gets in their eyes.

Bathrooms are often enclosed places with little ventilation. This makes using methylene chloride when refinishing bathtubs especially hazardous. Whether sprayed, brushed or poured, methylene chloride vapors can quickly build up in the tub where the worker is working. It does not take much to kill. Death has resulted from being exposed to as little as six ounces.

“Although risk of exposure is significantly reduced when controls are implemented, the threat can never be entirely removed,” says Borck. “Rather than the first choice, methylene chloride-based products should always be one of last resort.”