Minorities at Risk at Work

By: Scott Schneider is the LHSFNA's Director of Occupational Safety and Health. 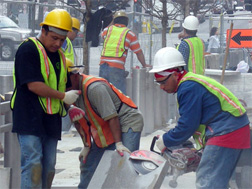 Every year, about 700 construction workers are killed on the job, and tens of thousands are seriously injured. But for minorities, it is even more dangerous.

Latinos – the predominate minority in construction – have the highest fatality rate among all population groups, an unwelcome distinction they have held for 15 years. Accounting for nearly one in every four construction workers, Latino construction workers face a 20 percent higher risk of dying from an on-the-job injury than their peers.

Not surprisingly, the minorities at highest risk are immigrant workers who do not speak English (most are native Spanish speakers). They may not understand safety instructions or warnings. They may not have been effectively trained. Their experience with work in their home country may differ because practices vary and safety regulations are weaker or not well enforced. They may also be unfamiliar with their rights to a safe workplace, compensation if injured or overtime pay if they work long hours. Many are treated as “independent contractors,” responsible for their own safety and well-being and exempt from social security, unemployment insurance and other laws. Minority and immigrant workers are often relegated to more dangerous and lower paying jobs.

Another major problem is legal status. Anyone here illegally is especially vulnerable. Such workers are constantly in fear of deportation and, therefore, afraid to raise safety or wage issues. In addition, almost two-thirds of Latino construction workers have no health insurance (although those in unions are much more likely to have coverage), and 60 percent of those without insurance have not seen a doctor in over a year.

Despite all these difficulties, progress is evident. Many efforts are underway to help improve the safety of minority and immigrant workers. 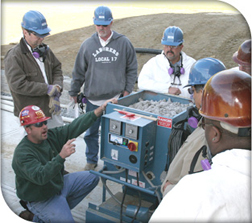 Training: OSHA has established new policies to make sure that non-English speaking workers are trained in their native languages, especially about their rights to a safe workplace. Most worker materials from the LHSFNA are available in Spanish, and many LIUNA training centers teach classes in Spanish and other languages. LIUNA local unions in Massachusetts and New Jersey even have programs to train select immigrant workers on their rights and to be safety leaders while organizing the unorganized.

Outreach: Following the Latino Summit in 2010, OSHA and NIOSH developed closer relationships with the Mexican and other consulates where information about safety and health risks and worker rights in the U.S. is provided through Ventanas Salud or health windows. OSHA continues to broaden its outreach efforts; for example the national Falls Campaign is producing materials in five languages, including small pocket cards in Spanish for distribution on job sites.

Wages: Working closely with day laborer centers around the country, the Department of Labor’s Wage and Hour office has been cracking down on violators who exploit immigrant workers.

Immigration reform: Legalizing the status of millions of immigrants will eliminate the fear of deportation. While OSHA is not allowed to check immigration status when it does inspections, many workers nevertheless are worried that talking or complaining to OSHA could lead to deportation.

Whistleblower protections: OSHA has strengthened its 11(c) efforts to protect workers who report safety and health concerns from discrimination and retaliation.

Worker centers: Centers like the Workers Defense Project in Austin, TX, organize and fight for the rights of undocumented workers to safe jobs and good wages.

While more needs to be done to make workplaces safer for minority and immigrant workers, immigration and health care reform along with initiatives by OSHA, LHSFNA, LIUNA, signatory employers and minority rights organizations are beginning to bridge the gap.