Unfortunately, a greater number of workers and their families across the U.S. and Canada are being forced to deal with the consequences of wildfires. With this year’s wildfire season still underway and many large fires still active, we may be on pace for a record number of fires and property damage. In 2020, wildfires burned more than 10.1 million acres in the U.S.; this year’s Dixie fire in California has already burned more than 700,000 acres alone.

It’s very likely that 2021 will be the worst wildfire season in recent history. That’s due in part to climate change, which is creating drier, warmer conditions that cause increased fire risk, a longer fire season and make fires harder to contain once they get started.

While the last several years have seen many wildfires occurring in California, this year many other western states are also being affected. Large wildfires have also occurred in Utah, Oregon, Idaho, Montana and Washington state. Many of these fires are so large, they’re noticeably reducing air quality 2,500 miles away on the East Coast. Canada, which isn’t typically an area we associate with wildfires, has also had its share of large fires this year, and residents as far away as Toronto have reported hazy skies and the smell of smoke in the air.

Closer to the fires, many residents are finding themselves under evacuation orders to leave their homes. Those who are fortunate enough to be out of the path of the fires still face very real health concerns over poor air quality.

Wildfire smoke contains a mixture of airborne particles, gases and chemicals, all of which can be harmful to our health. The airborne particles in wildfire smoke (also known as fine particulate matter or PM2.5) are made up of burned wood and other debris and are small enough to get deep into the lungs, negatively affecting lung function and worsening heart and respiratory conditions. Chemicals in wildfire smoke can include formaldehyde, polycyclic aromatic hydrocarbons (PAHs) and benzene – all substances known to cause cancer. 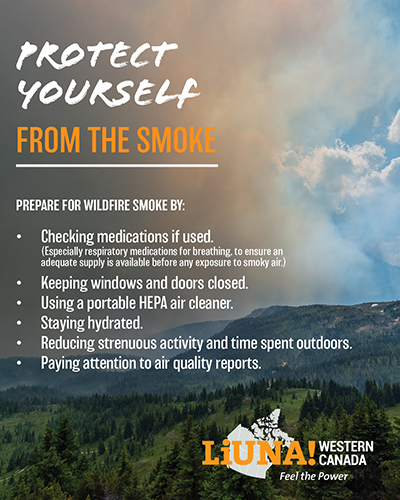 In the short term, inhaling wildfire smoke can cause sinus and throat irritation, coughing, headaches, chest pains and shortness of breath. Older adults, children and people with existing cardiovascular or lung disease (e.g., asthma) are at greater risk.

Outdoor workers, including those in the construction industry, are at increased risk from wildfire smoke because they are less able to seek shelter indoors and avoid contaminated air. As the duration of the exposure increases, workers are more likely to experience negative health effects and more severe symptoms. The prevalence of smoking and other pre-existing respiratory and cardiovascular diseases among the construction workforce in general also increases risk for workers.

In 2019, California became the first state in the U.S. to pass laws protecting outdoor workers from wildfire smoke. Now, Washington state has followed suit, due in part to more than 600 wildfires being reported in the state by the middle of July. Washington state’s Department of Labor & Industries passed emergency rules requiring employers to reduce or eliminate worker exposure to wildfire smoke once PM2.5 concentrations reach 55.5 ug/m3 or the Air Quality Index (AQI) reaches 151. At these levels, employers can reduce worker exposures by:

In addition to these steps, the emergency rule includes several worker notification and training requirements. Employers must train workers and supervisors about the hazards of wildfire smoke, including exposure symptoms, and ensure that workers showing symptoms are monitored and receive medical care when needed.