One of the greatest public health achievements in recent history is the substantial progress we’ve made in reducing lead exposure among children and workers. During much of the 20th century, lead in U.S. paint and gasoline fumes poisoned everyone. Lead in gasoline, paint, plumbing pipes, food cans and a variety of other products was especially harmful to the developing nervous systems of fetuses and children under the age of seven. Workers were also experiencing daily hazardous exposures to high concentrations of lead for many hours a day.

Over the past 50 years, OSHA, the Environmental Protection Agency (EPA) and other federal and state partners have worked together to eliminate or drastically reduce exposure to lead. OSHA established a lead standard for general industry in 1978, although construction workers were not covered under their own standard until 1993. The EPA banned lead from gasoline in the early 90s, and more recently has cleaned up lead-contaminated waste sites and established standards for dealing with lead-based paint. The public health and medical communities have worked together to increase awareness, identify at-risk populations and provide communities with blood lead level (BLL) testing. As a result of these collective actions, blood lead levels have declined by more than 90 percent since the mid-1970s.

As exposures have declined, our understanding of the health effects of lead exposure has improved. We now know that even small amounts of lead can be harmful. We also know that, despite an overall decline in lead exposure around the country, some communities are still experiencing high levels of lead exposure from old lead-based paint, corroding lead pipes and industrial waste sites. Continuing to reduce lead exposure, especially in communities that are still highly exposed, remains a public health priority.

“As we saw during the crisis in Flint, lead exposure can have severe impacts on the health of entire communities,” says LIUNA General-Secretary Treasurer and LHSFNA Labor Co-Chairman Armand E. Sabitoni. “Lead exposure is a potential hazard for LIUNA members during a variety of job tasks and can also be an issue for members and their families at home. Legacy lead in pipes and other infrastructure will take time to replace, so it’s important to take steps to reduce exposure over the long term.”

Lead exposure causes various acute and chronic effects, with some symptoms being difficult to observe and others being life-threatening. More and more evidence indicates that even low doses of lead exposure can have harmful effects on the heart, kidneys, brain and reproductive systems. Blood lead levels of five micrograms per deciliter (µg/dL) or lower have been associated with decreased kidney function; increased risk of hypertension and tremors have been seen at BLLs below 10 µg/dL.

Why Children Are at Increased Risk

Children are smaller than adults, so they ingest and absorb more lead per pound of body weight. They also spend more time closer to ground level. Measurements inside homes always find the highest lead concentrations closest to the floor and around window sills. Toddlers are especially susceptible to lead because they put contaminated hands in their mouths. 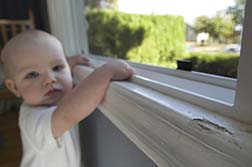 Protecting children from exposure to lead is important to lifelong good health. Even low BLLs affect children’s IQ, ability to pay attention and academic achievement. The most important point we have learned is that the effects of lead exposure cannot be corrected. This makes it paramount that parents, doctors and others take steps to prevent lead exposure before it occurs.

In the past, BLL tests below 10 µg/dL were not a concern and often not reported to parents. With the new understanding that there is no safe level of exposure, more lead-exposed children are likely to be identified, allowing parents, doctors and others to take action earlier to reduce the child’s future exposure.

Worker safety advocates, researchers and some state OSHA programs have contended for years that OSHA’s permissible exposure levels (PEL) for lead in the workplace do not adequately protect workers. In 2015, NIOSH designated a five µg/dL BLL as the reference level for adults, meaning that NIOSH views BLLs greater than five µg/dL as elevated and a risk to worker health. The U.S. Department of Health and Human Services recommends that BLLs among adults be reduced to under 10 µg/dL.

Current OSHA lead standards require workers to be removed from lead exposure when BLLs are at or above 50 µg/dL (construction industry) or 60 µg/dL (general industry) and allow workers to return to work when BLLs fall below 40 µg/dL. OSHA has acknowledged that current lead PELs are many times higher than the level needed to protect worker health, yet there is no movement toward updating these standards. As we wrote in Lifelines last month, this is why it’s problematic to rely too much on PELs as a benchmark to protect workers.

The silver lining of OSHA’s lead standards is that they give examining physicians broad flexibility to tailor special protections to the needs of individual workers. The medical community should use this power to implement the NIOSH reference level of five µg/dL for the management of lead-exposed workers. Doing so would help protect the long-term health of workers from a substance with no known safe exposure level.

For more information, order the Fund’s Lead Poisoning health alert from our online Publications Catalogue. Recommendations for medical management are also available from the Association of Occupational and Environmental Clinics, California Department of Public Health and the Council of State and Territorial Epidemiologist (CSTE) Occupational Health Surveillance Subcommittee.