A comprehensive new guide from OSHA and NIOSH summarizes what is known about nail gun injuries and their prevention. Available at no cost, Nail Gun Safety – A Guide for Construction Contractors can be downloaded from both the OSHA and NIOSH websites. 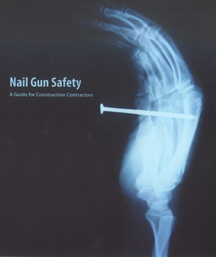 According to OSHA Director Dr. David Michaels, nail guns cause 37,000 emergency room visits each year and can also cause death. Most victims are workers in residential construction. In addition, nail guns are often used by Laborers and others in home projects.

Nail guns are powerful tools because they virtually eliminate the need to pound nails with a hammer. Their danger arises from the fact that they can fire so easily at unintended moments. This is because they are designed, in many cases, to fire in quick succession without the need to pull the trigger for individual shots. Many nail guns allow repeated firing merely by pressing the muzzle of the gun against a surface. This is known as a “contact” or “bump” trigger. Unfortunately, when a nail gun is operated in this rapid-fire setting, nothing prevents it from firing if it accidently makes contact with a hand, a leg, the body or the head of its operator or a co-worker. Data show that the injury rate of nail guns with “contact” triggers is twice as high as the rate of guns that require a “full sequential” trigger pull (the tip must be depressed first, then the trigger pulled) to fire each nail.

The chief reason cited for using “contact” triggers is increased speed in nail work, but the only study that has actually investigated the question found that “contact” firing is useful in only limited aspects of a construction project, resulting in merely a one percent time savings. As a result, the Guide recommends using full sequential trigger nail guns in all situations. It also recommends training for workers new to nail gun use, though it notes that injuries to experienced users are also common with “contact” trigger guns.

Additional recommendations are listed in the report.