Laborers and others who assisted in the rescue and recovery efforts at the World Trade Center (WTC) after the September 11 terrorist attacks will soon have special recognition at the National September 11 Memorial & Museum. These first responders, many of whom are now sick or have died from exposures to toxins at the WTC site, will be honored with the creation of a “Memorial Glade”. The new commemorative space acknowledges that many of these men and women, along with others who returned after the attacks to live and work nearby, sacrificed their health in the weeks and months following the attacks.

The design calls for a tranquil pathway located where the primary ramp used during the rescue operation once stood. It will end near the Survivor Tree, the severely damaged Callery Pear pulled from Ground Zero and nursed back to health. The design also incorporates steel from the WTC that visitors will be able to touch.

“It’s important that we never forget how these men and women, many of whom were or still are LIUNA members, put their own personal health and well-being aside to help the nation recover,” said LHSFNA Management Co-Chairman Noel C. Borck. “This memorial will help ensure that their actions and the sacrifices they made have their rightful place in history and will be shared with future generations.”

What visitors won’t see are names. More people, including some who may not even realize the connection, are continuing to develop illnesses related to September 11. A complete list isn’t possible. 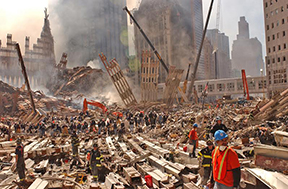 In the 17 years since the terrorist attacks, thousands of Laborers and others who spent time in or near the dust and rubble at Ground Zero and the Staten Island landfill where debris was taken have been diagnosed with a growing number of chronic conditions and illnesses. These include various respiratory illnesses and more than 70 cancers. More than 70,000 first responders and more than 14,000 survivors are receiving treatment and other compensation for medical conditions caused by exposure to toxic dust and fumes.

“We will never know the composition of that cloud, because the wind carried it away, but people were breathing and eating it,” said Dr. Michael Crane, a medical director at the World Trade Center Health Program (WTCHP). “What we do know is that it had all kinds of god-awful things in it. Burning jet fuel. Plastics, metal, fiberglass, asbestos. It was thick, terrible stuff. A witch’s brew.”

According to the WTCHP, nearly 10,000 first responders, downtown workers, residents, students and others have already been diagnosed with cancers linked to September 11. More than 1,700 people have died from these and other illnesses related to 9/11 exposures. Unfortunately, the number of people affected is only expected to grow. Many of the cancers and other conditions associated with exposure at Ground Zero have long latency periods and are only now beginning to appear. The WTC Health Program is now reporting 15 to 20 new referrals every week. 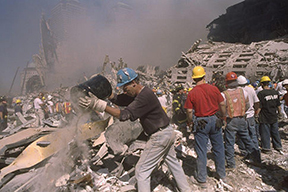 “9/11 is still killing,” said John Feal, an advocate for WTC responders. “Sadly, this fragile community of heroes and survivors is shrinking by the day.” First responders say the creation of the Memorial Glade helps ensure that as the events of September 11, 2001 fade, the sacrifices they made to help the nation recover will not be forgotten.

“As a recovery worker and the wife of a first responder, it gives me a sense of peace to know that there will be a place dedicated to honoring our story,” said 9/11 Memorial Museum docent Sonia Agron. Both she and her husband, a retired New York City police officer, have suffered from cancer and other illnesses related to the days they spent assisting in recovery efforts at the WTC site. “We cannot get back what 9/11 took from us, but to know we will have a place of honor on the Memorial to call our own is deeply meaningful.”

What the Sun Is Actually Doing to Your…

Even if you understand the importance of protecting yourself from the su...