For Laborers, overhead drilling is one of the most physically taxing of tasks. Perched on a ladder – an eight-pound drill held aloft with one hand – a Laborer pushes 55 pounds of force into a ceiling of concrete or metal in order to make an anchor hole. It takes one to two minutes to drill the hole, with the awkward, strenuous balancing act repeated hundreds of times throughout a shift. Anchor holes are necessary for hanging pipes, cable trays and ductwork, but the requisite overhead drilling can lead to shoulder pain, arm fatigue and other work-related musculoskeletal disorders (MSDs). Overhead drilling contributes to the construction industry’s high rate of non-traumatic soft tissue injuries to the neck, back and upper extremities. 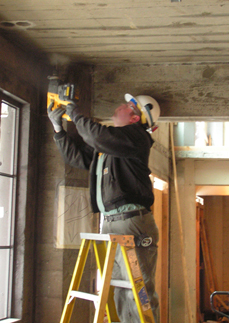 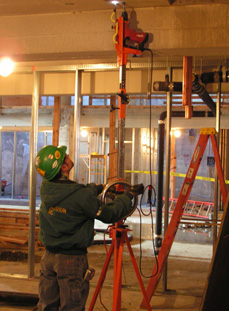 The Overhead Drill Press, developed at the University of California San Francisco (UCSF), with assistance from outside engineers and contractors, shows promise for improving this situation. Set on a wheeled tripod for ease in positioning and operation, the tripod allows workers to remain on the ground while drilling anchor holes in a ceiling 12 feet above. Once positioned, the drilling is accomplished without the need to look up, eliminating many unwieldy postures, stresses and strains. Fall hazards are removed because a ladder is not necessary. Hand vibration is avoided, and noise and dust exposures are reduced as the worker is further away from the actual drilling.

With an overhead drill press, workers are also less likely to develop MSDs. According to Bureau of Labor Statistics (BLS) compiled from 2004, construction workers with MSDs missed an average of 10 days of work. A torn rotator cuff – an injury related to overhead drilling – can sideline a worker for weeks.  MSDs make up more than half of the total injuries and illnesses within the construction industry. They cause disabilities that seriously impact worker earnings and contractor profits.

“Overhead drilling is a job they hated to do, but now the load on the arms, shoulder and back is so much less. They won’t get as fatigued and they are more productive,” says David Rempel, the UCSF Division of Occupational and Environmental Medicine professor who spearheaded the five-year development project.

The overhead drill press earned high marks during field tests. Rempel’s research team, which has no patents or economic interest in the device, is now looking for a manufacturer to mass produce the tool.

In the meantime, UCSF will provide design plans so that contractors can build their own overhead drill press. Contractors can also purchase the tool at cost through Rempel’s lab.

Contractors interested in learning more about the overhead drill press should contact the UCSF Ergonomics Program by calling 510-665-3403 or by emailing alan.barr@ucsf.edu.

Looking into a New Year of Construction Laborer…

In November, the Bureau of Labor Statistics (BLS) issued their latest re...

Tracking Sprain and Strain Trends in the Construction…

Construction workers have demanding jobs, and that’s especially true for...

Unfortunately, everyone is well aware of the ongoing opioid crisis here ...

Reducing Risk for Lower Back Injuries

Back injuries, especially those affecting the lower back, are the most c...

“The personal experience of pain is often difficult to describe, and the...

By now the relationship between opioids and addiction is clear. Between ...

Our series on complementary health approaches for pain management contin...

Earlier this year, we looked at how chronic pain – a problem many constr...