With this issue of LIFELINES, we are proud to publish, for the first time, the new logo of the Laborers’ Health and Safety Fund of North America (LHSFNA).

The Fund’s trustees approved the logo at our April Board Meeting. It was the outcome of an extensive process of strategic communications planning and design consideration. 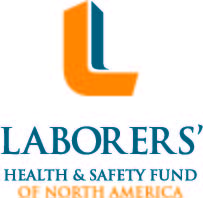 In modernizing our logo, important consideration was given to similar updates at LIUNA and the LIUNA Training and Education Fund (LTEF). This is because the union and its signatory employers embrace a highly collaborative strategy aimed at advancing Laborer training, contractor marketing and workplace safety and health. It made sense that the images, colors, fonts and messages used in the Fund’s new logo should be consistent with those already employed by LIUNA and LTEF.

LIUNA’s program is perhaps best known for its creative use of the color ORANGE. The union’s brand – LiUNA! – is displayed in orange, and the color is prominently featured throughout the union’s website and publications. Today, all across the United States and Canada, Laborers are easily recognized for their orange t-shirts and banners.

Taking the lead from LTEF, both the LHSFNA and the Laborers-Employers Cooperation and Education Trust (LECET) adopted logos of parallel design that, also, can be augmented in appropriate situations with a fund-related tagline. LTEF’s tag is The Power to Excel. Ours is The Power to Protect, and LECET’s is The Power of Partnership. A new Tri-Funds logo has also been developed.

Now, in fresh, modern style as well as long-established practice, the Tri-Funds express one common mission on behalf of Laborers and LIUNA’s signatory employers.

Moving on to our theme this month…

It is well-known that the United States and Canada are, increasingly, multi-cultural nations. Indeed, before mid-century, no racial or ethnic group will be a majority in the U.S. What will be the impact of this demographic transformation in the realm of health care?

We found the shift will have little practical effect. It turns out that in health, whatever our ethnic origins, we are all essentially alike.

The Human Genome Project, completed in 2003, found that humans are 99.9 percent similar at the molecular level. This runs throughout and across all racial and ethnic groups. Relative to our internal biology, the categories of race and ethnicity are too cultural and biologically superficial to provide useful health guidance. As the infographic in our centerfold demonstrates, whatever our ethnic status, our lives all end due to virtually the same causes.

The variations in health status in the U.S. and Canada are not racial or ethnic as much as social and economic. Poverty, unhealthy lifestyles (in particular, poor diets) and limited access to care generate our nations’ greatest health disparities. These realities impact the poor regardless of ethnicity but, due to the history of racial discrimination, are amplified in some minority communities. Recent immigrants face additional social and economic obstacles.

According to the Centers for Disease Control and Prevention (CDC), “Addressing social determinants of health is a primary approach to achieving health equity. Health equity is when everyone has the opportunity to ‘attain their full health potential’ and no one is ‘disadvantaged from achieving this potential because of their social position or other socially determined circumstance.'”

In our look at the state of minority health in the U.S., we see that the states and federal government are active in addressing American health inequities. We report on President Obama’s plan to mitigate minority health disparities through the Patient Protection and Affordable Care Act (PPACA) as well as its efforts to expand Medicaid coverage for the working poor. We also report on current federal efforts to reform immigration law and on a variety of public and private programs to improve on-the-job health and safety for immigrants.

Appreciation of diversity and disparity in health care often starts with minority considerations, but, ultimately, it must embrace the individuality of each person’s situation. We see promise in the increasing focus on each patient’s unique status, and we look forward to seeing how this focus advances health care in the decades ahead.

Short safety toolbox talks, usually given at the beginning of the workda...