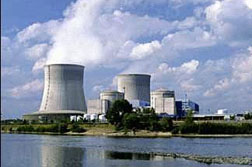 The white paper From Three Mile Island to the Future: Improving Worker Safety and Health in the U.S. Nuclear Power Industry, was prepared for the Blue Ribbon Commission on America’s Nuclear Future by Stoneturn Consultants and peer-reviewed by Dr. Jim Melius, the LHSFNA’s Research Division Director and the Administrator of the New York State Laborers’ Health and Safety Trust Fund. It was published on March 14, 2011, three days after the earthquake and tsunami struck Japan.

Today, the U.S. has 104 nuclear reactors, but all are more than 20 years old, reflecting the cancellation of all new nuclear projects in the wake of the Three Mile Island and Chernobyl calamities. However, application for licenses to construct 17 new plants have been submitted, and the American industry is optimistic about renewed expansion in the decades to come. Worldwide, 440 reactors operate in 30 countries, and 60 new ones are under construction.

LIUNA represents many “outage” workers – those who perform maintenance work at American nuclear facilities during annual shut-downs to replace “spent” fuel rods – as well as many construction workers who would build the proposed new plants. LIUNA supports the return of nuclear power to a significant position in the nation’s energy generation program.

Melius points out that “our union has had a close-up look at the dangers of nuclear radiation.” During the decades when the manufacture of nuclear weapons was a key U.S. defense priority, LIUNA represented defense contractor employees, many of whom, it was later revealed, were unknowingly exposed to radiation levels that eventually produced severe illness and early death. “While the tragedy in Japan affirms the Commission’s focus on the risks of nuclear power for the public in general,” says Melius, “this white paper serves a vital purpose by identifying and highlighting the risks that nuclear workers face in the context of routine operations.”

In general, the study found “that the record of occupational safety and health (OSH) performance for civilian electricity generation is very good, and that the industry’s OSH performance has improved in measureable terms since Three Mile Island.”

Recordable and lost-time injury rates in the industry are much lower than other energy sectors, on a par with rates in the insurance and finance industries. Also, although the rate of radiation exposure among outage workers is about twice that of plant workers, in both cases exposure of workers is low. The National Regulatory Commission (NRC) sets the maximum allowable annual dose of radiation for nuclear workers at five rem, but for many years, no worker has received a dose greater than three rem. In the most recent year of reports (2008), only five received more than two rem. In total, since Three Mile Island, the average radiation dose received by workers who recorded any exposure at all has declined by over 90 percent. The nuclear power industry used the same hands-on training approach that LIUNA pioneered for hazardous waste clean-up and asbestos abatement to ensure that all workers doing outage maintenance work are familiar with the planned job tasks and the precautions needed to limit exposures and the risk of injuries.

During a partial meltdown of fuel rods at the Three Mile Island facility in Pennsylvania in 1979, a catastrophic disaster was narrowly averted. Although no serious injuries occurred, the incident served as a wake-up call, and in the following years, the industry achieved significant, technical safety advances by recruiting managers from America’s Nuclear Navy. Subsequently, the 1986 meltdown at Chernobyl (in Ukraine) raised concerns not only about the technical side of the Soviet Union’s nuclear plants but also about the human failures of staff and the shortcomings of the country’s nuclear safety culture. Then, in 2002, an all-but-accidental prevention of a near explosion at the U.S. Davis-Besse plant near Oak Harbor, Ohio, stoked fears that American nuclear power also lacked an adequate safety culture. Since then, to advance safety and rehabilitate its public image, the American industry has embraced a concerted effort to recognize and address human performance factors. In the process, the industry has restored broader public favor and won support from politicians, including the Obama Administration.

Despite the evident success since 1979, the study found that progress is not uniform and that further improvement is possible and necessary. Among its recommendations are:

The study was scheduled for publication when the earthquake and tsunami struck Japan, severely damaging six reactors at the Fukushima nuclear power plant. Although only a smattering of information was then known about the extent of the damage, the study’s authors felt compelled to address the danger and did so in a special introductory note:

“The relative risks of nuclear energy should be assessed in comparison to the risks of the other energy sources. What has become vividly evident in the past twelve months is that all our major sources of energy – nuclear, coal and petroleum – require the most careful management of very high risks.”

Although not specific, the comment put the evident danger in Japan alongside last year’s coal and petroleum catastrophes. On April 5, 2010, 29 miners were killed in a coal mine explosion at the Big Branch Mine in West Virginia, and on April 20, 11 oil workers were killed when the Deep Water Horizon oil platform blew up in the Gulf of Mexico.

“It will be essential in the coming months,” the authors’ continued, “to determine how well the containment systems and the plant workers in Japan did in protecting not only the general public, but also those workers on the front lines of the crisis. Then we must in a clear-eyed way place that analysis in the context of our overall energy security and climate change goals to chart the nuclear future of the U.S.”

“The tragedy in Japan has raised new caution about nuclear power’s resurgence in the U.S., but it does not seem derailed,” concludes Melius. “Rather, the government is going to review nuclear safety with an eye to learning from Japan to better plan, situate and construct nuclear facilities in the U.S. Given the likelihood that the industry will continue and expand operations, this study provides important guidance for strengthening worker protections. By addressing these issues, it will contribute to the larger goal of ensuring the general safety of the public as well.”