By: Also: Workers' Memorial Day materials from the AFL-CIO

“On Workers’ Memorial Day,” says LIUNA General President Terence M. O’Sullivan, “we mourn the lives of men and women who were killed simply earning their living.These tragic losses are preventable.”

Each year more than 4,400 Americans leave home for work, never to return. In construction, one of the most hazardous occupations, three workers are killed on the job every day of the year. These lost lives are commemorated on April 28, the anniversary  – in Canada – of the nation’s first workers’ compensation act and – in the U.S. – of the founding of the Occupational Safety and Health Administration (OSHA).

OSHA’s mission is to prevent the loss of life, injuries and illnesses that plague American workplaces.This year is the agency’s 40th anniversary. When OSHA was established, more than 14,000 workers died each year on the job. Today, despite a doubling of the workforce, that number has been cut by 70 percent. The lives saved in the intervening years testify to the effectiveness of federally-defined, government-enforced, workplace safety regulation. 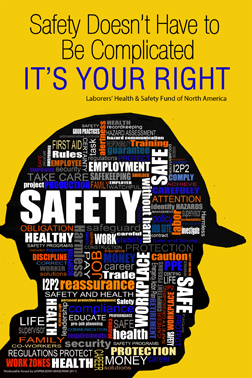 This and the three illustrations with OSHA: New Directions at 40 are new safety culture posters developed by the LHSFNA. Participating LIUNA signatory employers, local unions and training centers may order copies through the Fund’s online publications catalog.

“OSHA’s establishment was driven by America’s unions,” says O’Sullivan. “The struggle for government regulation to improve safety and health at the workplace was long and hard. Along with wages and hours, on-the-job safety was a basic issue that drove workers to form unions in the first place.”

The right of workers to bargain collectively – enshrined in the National Labor Relations Act of 1935 – brought on-the-job safety within the reach of union members. Yet, at the peak, only a third of workers had union contracts, and non-union employers were among the most ruthless. With no law ensuring safety for every worker, unions continued the fight for federal regulation, and in 1971, with OSHA’s creation, they succeeded.

“Today, however, the right to a safe workplace is under attack in two ways,” O’Sullivan warns. “First, business lobbies and misguided politicians, in the name of cutting deficits, propose major cuts in OSHA’s budget. Secondly, the same groups are attacking collective bargaining at the state level in an effort to end negotiation on all contract issues, including safety and health. In effect, this alliance seeks to roll back the clock to a time when safety was entirely an employer’s prerogative, and injuries, illnesses and fatalities were unchecked by national standards and national enforcement.”

Uncompromising, O’Sullivan draws a line against retreat. “The battles in Washington and Wisconsin and a host of other states over budget priorities and the bargaining rights of workers are epic revivals of workers’ long and unremitting defense against the callousness of the most self-interested corporations and their lobbyists. These battles stiffen our resolve and remind us that, on this Workers’ Memorial Day, our work’s not done!”

Fresh Evidence: In a study published last month, University of Michigan researchers find that “construction unionization is associated with lower industry and occupation fatality rates. Moreover, the positive effect that unions have on reducing fatalities appears to be stronger in states without right-to-work laws.” For more information, see Right-to-Work Laws and Fatalities in Construction.