They are the roadmaps for identifying workplace safety and health problems, and now the Occupational Safety and Health Administration (OSHA) wants to fine tune its 300 Log to better reflect the sprains, strains and lift injuries that occur on the job. 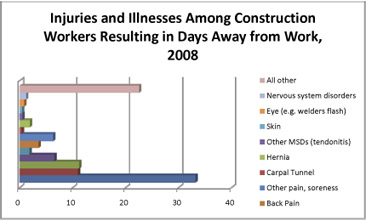 A Notice of Proposed Rule Making (NPRM) calls for adding a separate column to the log for recording work-related musculoskeletal disorders (MSDs). For a three months beginning each February, the logs are posted on places like construction office bulletin boards so that the previous year’s illness and injury records can be readily reviewed by everyone on the jobsite.  Skin disorders, respiratory conditions, poisoning and hearing loss all have designated columns on the 300 Log.  MSDs are currently recorded in two catch-all categories: “all other illnesses” when the disorder is chronic, as with carpal tunnel syndrome or tendinitis, or “injury” when the problem is temporary, like a sprain or strain.

If approved, the requirement would restore a regulation that was previously issued in 2001. Prior to that year, MSDs were included in a column with repetitive trauma disorders and noise. OSHA subsequently separated MSDs and noise into two separate columns, but the MSD column was deleted in 2003 before the provision became effective. OSHA believes a separate MSD column will enhance the detailed accuracy in recordkeeping that is necessary for improving workplace health and safety.

“Musculoskeletal statistics will be more readily accessible to employers and workers, which will make it easier to identify and address problems at the workplace,” says LHSFNA Management Co-Chairman Noel C. Borck. “The current method leads to underreporting and not enough attention to implementing appropriate corrective measures.”

According to the Bureau of Labor Statistics (BLS), musculoskeletal disorders in 2008 were responsible for approximately one third of all workplace injuries and illnesses requiring time away from the job. More than 300,000 MSDs – of which approximately 29,000 were in the construction industry – required an average of ten days away from work. Nearly half of these injuries were sprains and strains. Bending, reaching, twisting and slipping without falling also accounted for a significant number of MSDs and time away from work.

A public hearing on the proposal is scheduled for this month. OSHA is expected to issue a final rule this summer. If approved, the separate column will be added to the OSHA 300 Log beginning in 2011.

“Time off to recover from these injuries costs employers millions of dollars in compensation claims and related expenses, such as hiring and training replacement workers,” says Borck. “With better recordkeeping, this situation should improve. Transparency creates awareness which leads to safer workplaces and fewer on-the-job injuries.”