OSHA Rulemaking Grinding to a Halt

The Occupational Safety and Health Administration is responsible for protecting the safety and health of workers in the United States, but its own reports indicate that setting safety standards is a low priority at the agency.

OSHA has a three-pronged mandate: (1) to issue safety and health standards; (2) to enforce those standards; and (3) to assist companies in compliance. Currently, only three percent of the agency’s budget is devoted to standard setting and the actual dollar amount, relative to inflation, has declined in recent years.

In April, OSHA published its semiannual review of its rulemaking agenda in the Federal Register. It shows how slowly the agency moves. Of 27 actions in the Prerule, Proposed Rule, Final Rule, Long-Term Action and Completed Action stages, only two are complete, and one of those – Hexavalent Chromium, enacted under court order – is now held up in further litigation.

Fourteen of the 27 actions are construction-related. Among these, the average length of time since OSHA began rulemaking – not counting the two that started in May and June of this year – now stands 7.4 years!

The one completed action (Hexavalent Chromium) took 13 years to finish. The Assigned Protection Factors standard is scheduled for final action in July, but it has taken 24 years to get to this point.

Falls are the most common cause of construction fatalities, yet the Walking Working Surfaces and Personal Fall Protection Systems standard has languished more than 16 years since the first action was initiated. Over the last 13 years (data for earlier years is unavailable), 9149 American workers have been killed in falls, an average of 703 per year.

Similarly, while hearing loss is a widespread problem among construction workers and it has been 20 years since a hearing conservation standard was issued for general industry, four years have passed since work began on a possible standard for construction but, now, no further action is promised.

As part of a settlement agreement with the United Steel Workers of America, OSHA issued a general industry standard for confined spaces in 1993 and agreed to issue a proposed rule for construction as well. Thirteen years later, OSHA says a Notice of Proposed Rulemaking (NPRM) will now be issued in October. When a final rule might be adopted is anyone’s guess.

“As these examples indicate, OSHA’s process is so slow that sometimes advancing science has rendered a permissible exposure limit or another aspect of a standard obsolete by the time it is adopted,” says O’Sullivan. “The basic problem is the lack of political will to create and improve standards and to keep them up-to-date. Congress, the Executive Branch and OSHA must expand funding and accelerate rulemaking immediately.  Another day wasted means another Laborer fatality, serious injury or illness.”

The LHSFNA’s Occupational Safety and Health Division monitors and participates in standards development efforts at OSHA and with the American National Standards Institute (ANSI) and it assists Laborers and contractors in the implementation of safety programs. For more information, contact Scott Schneider, OSH Division Director, at 202-628-5465. 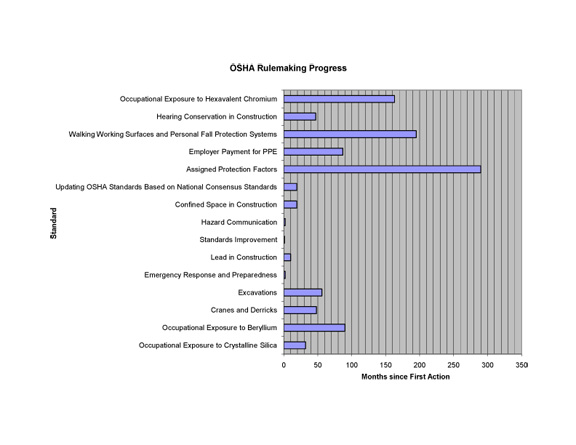