Osteoporosis: A Threat to Women and to Men

Osteoporosis is often regarded as a “female” disease, and one out of every two women over the age of 50 may suffer a broken bone because of it. However, men are also susceptible. One out of every four older men will also suffer an osteoporosis-related break. Like the women in their lives, it is essential that men take precautions now to avoid painful, life-altering fractures in the future. 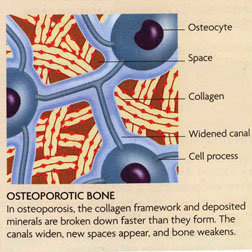 Healthy bones are a conglomeration of protein, collagen and calcium. With osteoporosis, this matter changes from dense to porous. Bones become fragile and break easily. Sometimes, all it takes is a cough or a sneeze. The hip, spine and wrist are particularly susceptible to osteoporosis, but any bone can be affected. Victims can lose inches of height and may develop severe back pain.

However, in its early stages, osteoporosis is silent. Oftentimes, it is not until they suffer a fracture that people learn they have the disease. For them, prognosis is poor, particularly if they have broken a hip. An average of 24 percent of hip fracture patients over age 50 die in the year following their injury. One in five requires long-term care.

Osteoporosis is serious and expensive. In the United States, the disease was responsible for an estimated two million fractures in 2005 and $19 billion in health care costs. Osteoporosis can develop at any time, but is more common in people over the age of 50. With that segment of the population growing, experts predict that within the next 15 years, osteoporosis will lead to three million fractures annually at a cost of $25.3 billion.

According to the National Osteoporosis Foundation (NOF), approximately ten million Americans have the disease. Another 34 million have osteopenia (low bone density), which has no symptoms but is a sign of increased risk for developing osteoporosis.

Osteoporosis is linked to estrogen loss, which is part of the aging process. In women, estrogen loss is acute after menopause, and that is why osteoporosis among women is diagnosed more frequently. Although not as rapidly, men also lose estrogen. They tend to be older when osteoporosis strikes. They are also twice as likely as women to die from a hip fracture.

Risk factors for osteoporosis in men and women include:

Find out your osteoporosis risk. Talk to your health care provider about undergoing a bone density test using dual energy x-ray absorptiometry (central DXA). Osteoporosis cannot be cured, but with lifestyle changes and medication, it is often treatable. With early detection, the likelihood of suffering debilitating, deadly fractures can be reduced.

Have you ever indulged in a decadent treat after a workout, claiming you...

A Look at Plant-Based Meat Alternatives

In the past, plant-based meat alternatives were relatively straightforwa...