In the span of a few days in July, two major leaguers were hit in the head by pitched balls, and a pitcher was struck in the head by a batted ball. Coincidently, Rawlings – a sporting goods manufacturer – had a new, stronger batting helmet, the S100, ready to introduce. Suddenly, the PPE controversy hit the sports pages and radio talk shows.

More than a few construction Laborers took note. No doubt, older Laborers had heard it all before.

One side invoked baseball tradition, personal liberty and each player’s sense of style. The other side talked safety and the fact that current baseball helmets are protective against pitches only up to 70 mph (70 is a change up in the Majors). Most major league pitchers consistently throw over 90; the S100 will protect at 100 mph. 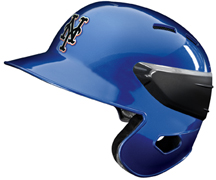 The two hit batters offered contrasting perspectives. Jeff Francoueur, a New York Mets outfielder, said, “I’m not wearing it. We’re going to look like a bunch of clowns out there.” Second baseman Edgar Gonzales of the San Diego Padres, who was hospitalized for two days following his beaning by a 93-mph pitch, took the opposite stance. “After this happened to me, I would wear anything. I don’t care how goofy it is, as long as it could help protect me.”

Similar attitudes about personal protective equipment are heard on construction worksites though, in recent years, more about other kinds of PPE than head protection. For instance, it was only within the last ten years that Laborers committed to wearing shirts and sunscreen in the summer to protect against skin cancer. “We all wanted that season-long sun tan,” recalls one, who ended up with skin cancer.  And some workers still resist hearing protection because, they say, it is uncomfortable; as a result, many retired Laborers suffer with hearing loss.

In sports, it is often the owners who fight to require protection. Compared to the multi-million-dollar salaries they pay, the cost of protective gear is small potatoes if it keeps a star athlete on the field. In other settings, employers are the last to come around. For instance, as concerns built recently about H1N1 (swine) flu, unions with health care members – including LIUNA – were adamant that hospitals stock up on NIOSH-approved N95 respirators, but some hospitals dragged their feet, claiming that patients are intimidated by nurses in masks.

Whether slowed by employers or employees, the introduction of PPE usually involves some kind of prolonged cultural battle to establish a protective ethic, followed eventually by an authoritative edict. After seat belts were invented, another decade passed before installation in cars was required; it was another decade before states started ticketing.

Sports fans with a taste for history know that some NFL players did not wear helmets until the League mandated their use in 1943. When hockey goalie Jacques Plante started wearing a mask after getting hit in the face in 1959, he was roundly criticized, even by his own coaches. Today, masks still are not required, but every NHL goalie wears one.

Construction hardhats took a long time to arrive as well. The first commercially-available hardhats were manufactured in 1919 by the San Francisco-based Bullard company, makers of mine equipment. They were modeled on the steel helmets worn by soldiers in World War I. More than 15 years later, the Golden Gate Bridge was the first project to require hardhat use.

It is the same story in sport after sport, in workplace after workplace. Yet, nowhere did the introduction of PPE ever actually cut athletic excitement or curb on-the job production. All it ever did was make work safer.