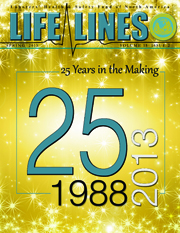 Ronald Reagan was President. The Soviet Union was still intact. The top grossing movie was Rain Man, and George Michael’s Faith topped the music charts (it was vinyl, but you could get it on cassette tape, too). Personal computers were exotic; fax machines were the hot new thing. No one had email, much less a cell phone. Social media? Inconceivable.

Today, the Fund’s 25th anniversary finds most worksites safer than ever and Laborers much more involved with their own wellness.

Enhanced on-the-job safety and promotion of healthy lifestyles for Laborers were the Fund’s initial goals, and it has devoted a quarter century to meeting them. It’s an ongoing challenge, but the evident progress provides assurance that the Fund will find continued success in its mission.

In 1988, as the Fund got started, a thorough understanding of the injuries and illnesses that befall Laborers was essential. Grant-funded research was an early order of business. Among the findings: a disproportionate number of Laborers smoked, hearing loss was rampant among retired Laborers and backing equipment, not crashing motorists, was responsible for most highway work zone fatalities. Addressing these and a widening list of OSH and wellness concerns, programs developed by the LHSFNA’s expert staff guided LIUNA, its members and its signatory employers in implementation of best practices that have led to healthier Laborers and safer workplaces across the U.S. and Canada.

“We’re proud of our Health and Safety Fund’s achievements,” says LIUNA General President Terry O’Sullivan, “and we know the Fund will continue to find ways to improve the health and safety of our LiUNA members and their families.”

These links review the work of the Fund’s Divisions:

LIUNA Affiliates Are Stepping Up to Get the…

As the national rollout of several safe and effective COVID-19 vaccines ...