Every month, a highway worker is killed by a backing construction vehicle, usually a dump truck. A dump truck, weighing about 40,000 pounds and with a huge dirt or asphalt container on the back, has a wide blind spot. Truck drivers cannot see what is behind them, and anyone in the blindspot is in jeopardy. Yet, backovers are completely preventable. 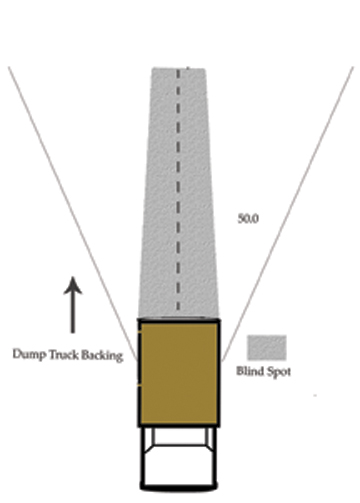 The first line of defense is a working back-up alarm. However, back-up alarms are often not effective, due to excessive background noise or the unconscious adjustment of workers to the regularity of alarms throughout the worksite. Despite these concerns, traffic control managers should make sure all vehicles have working alarms when they come on the site. Also, new types of alarms have been developed that distinguish from background noise and are easier to hear. Construction managers should talk with the truck owners about getting better alarms for their vehicles.

Whenever a dump truck is operating in a work zone, a spotter needs to monitor and direct its backing. At the cutting edge of work zone safety, Washington State enacted a law in 2004 that requires a spotter or a back-up camera whenever a truck backs in a highway work zone. However, spotters need to be constantly alert because they, too, are sometimes run over by trucks while doing their jobs.

The LHSFNA has a booklet developed with NIOSH and our employer partners to explain how to implement an ITCP. The Fund also has health alerts on Backing Safely, Driving Safely and Spotter Safety.

Several large companies like UPS now use back-up cameras or radar systems on their delivery trucks. Similar equipment exists for construction trucks. After testing, NIOSH has concluded that back-up cameras are helpful in giving operators a view of what is behind them. They work best in combination with a radar system that beeps louder or faster when closing in on an obstacle behind the truck and alerts the driver to look at the display screen. Construction companies buying new vehicles should ask about adding such equipment, which costs a few hundred dollars. Older vehicles can be retrofitted. The LHSFNA Occupational Safety and Health Division can help direct interested owners to equipment suppliers.

While Laborers and truck drivers do not have eyes in the back of their heads, eyes – technological eyes or spotter eyes – can be put at the back of a truck to watch the blind spot while the work is done. If those eyes are always open and operative – and if backing operations are minimized through ITCPs – backover deaths and injuries can be eliminated.

A co-worker being seriously injured or killed on the job from a backover...