This booklet provides the most comprehensive summary available of the duties of competent persons in these areas of construction operations:

Order through the LHSFNA Publications Catalogue.

“Arising from the unique characteristics of construction work, the ‘competent person’ is one of OSHA’s most vital and effective worksite safety creations,” says LIUNA General President Terry O’Sullivan. “It’s surprising, therefore, that OSHA’s proposed silica standard does not adequately emphasize its competent person provision. This lapse must be addressed in the final stages of the rule’s adoption.”

Along with LIUNA, the LHSFNA, the Building and Construction Trades Department (BCTD) and professional organizations such as the American Industrial Hygiene Association (AIHA) will testify in support of this requirement in the coming months, as OSHA seeks comment on the long-delayed silica standard that was formally proposed in September.

Appointed by their employers, competent persons are usually senior workers with extensive experience with the designated task. By OSHA definition, they are responsible for seeing that the work is planned and conducted according to the agency’s established safety standards, and they have the authority to take immediate action to correct deficiencies, including, if necessary, temporarily shutting down the work until problems are resolved.

Currently, OSHA requires competent persons in wide areas of construction work (see sidebar). The LHSFNA publication, Laborers’ Guide to Competent Persons, summarizes the duties of the competent person in each of these areas.

Silica is a known carcinogen, and exposure is a serious health hazard which was first addressed by OSHA in a 1971 standard. Since then, however, many studies and analyses have demonstrated that the agency’s permissible exposure limit (PEL) is far too permissive. Working under this limit, construction laborers continue to develop silicosis and lung cancer. A key component of the new standard, therefore, is a significantly tighter PEL. 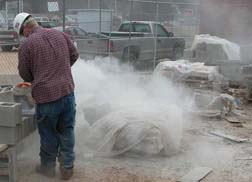 A tighter PEL, however, is only part of the problem, as Assistant Secretary of Labor (and OSHA Director) Dr. David Michaels noted in his August 23, 2013, announcement. “OSHA’s objective is to develop a standard that not only protects workers, but also makes sense in the workplace.” Making sense in the workplace is far more difficult in construction than in other industries because, unlike in factories where work and hazards are relatively consistent from day to day, safety risks in construction constantly change as the building process moves through various stages. With changing conditions the only constant, assessing and managing construction risk is a complex operation. To account for this complexity, OSHA has proposed two silica standards, one for general industry and another for construction.

“In construction,” says O’Sullivan, “a knowledgeable worker – a competent person – is absolutely necessary to monitor the evolving work and its silica hazards, to assess what protections are necessary and to ensure that these protections are consistently and fully implemented. A silica standard without a stronger competent person requirement is a defective standard.”

Responding to requests from business interests, OSHA has extended the deadline to January 27, 2014, for written comments on the proposed rule. Public hearings are scheduled to begin on March 18. In collaboration with LIUNA, the LHSFNA is preparing comments and testimony and is seeking input from Laborers and LIUNA leaders. To assist, contact LHSFNA Senior Safety & Health Specialist Travis Parsons at 202-628-5465.