Suicide is now the second most common cause of death among young people between ages 10-24. The CDC reports that suicide rates among young people jumped 56 percent between 2007 and 2016. Teens dealing with rejection, failure, breakups and family turmoil may be unable to see they can turn their lives around – and instead end up viewing suicide as a permanent response to a temporary problem.

Many teens who attempt or die by suicide have depression or another mental health condition. While we don’t know all the reasons for the rise in suicide among adolescents and young adults, we do know that increased social media use, lack of sleep and being acutely aware of stress experienced by the adults in their lives are all contributing factors for depression. A growing amount of research points to the association between heavy technology use and rising rates of suicide and depression among adolescents and young adults due to the following:

Factors Contributing to a Higher Risk for Suicide 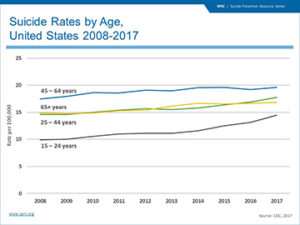 There are many additional factors that increase risk for suicide among teens and young adults, including:

Suicide Warning Signs to Look For

Talk to him or her immediately. Don’t be afraid to use the word “suicide.” Talking about suicide won’t plant ideas in your teen’s head. Remind your teen that he or she can work through whatever is going on – and that you’re willing to help.

Seek medical help for your teen. Ask your teen’s doctor to guide you. Teens who are feeling suicidal usually need to see a psychiatrist or psychologist experienced in diagnosing and treating children with mental health problems. The doctor will want to get an accurate picture of what’s going on from a variety of sources.

You can take additional steps to help, including:

Remember, teen suicide is preventable. If you’re worried about your teen, talk to him or her and seek help right away.

Text from anywhere in the U.S. with a trained Crisis Counselor. Text Hello to 741741. Every texter is connected with a volunteer trained in active listening and collaborative problem solving.

To make use of similar resources in Canada, visit Crisis Services Canada at www.crisisservicescanada.ca/.