One of the many side effects of the pandemic is that people have been traveling less. Fewer cars on the road and planes in the air led to global improvements in air quality that would have been hard to imagine achieving a year ago. According to the Federal Highway Administration, travel on U.S. roads and streets dropped 40 percent overall in April of 2020 and 26 percent overall in May of 2020.

Unfortunately, it appears that one of the other effects of having fewer cars on the road lately is that work zones became a much more dangerous place for workers and motorists. Department of Transportation (DOT) officials in states across the country are reporting an increase in the number of crashes and fatalities in work zones.

“The maintenance demands of our nation’s crumbling infrastructure combined with a rise in speeding and distracted driving are creating dangerous conditions in highway work zones,” says LIUNA General Secretary-Treasurer and LHSFNA Labor Co-Chairman Armand E. Sabitoni. “As much as possible, we have to take steps to separate workers from passing motorists with barriers and other positive protection.”

According to Becky Allmeroth, chief safety and operations officer for the Missouri DOT, the number of vehicles crashing into truck-mounted attenuators doubled from 21 to 41 year over year. Attenuators are attached to the back of trucks or other construction vehicles in highway work zones as a way to provide a barrier between workers and motorists. Despite this, workers are still sometimes injured or killed if they are in the vehicle at the time of impact or if the intruding vehicle is heavy enough (e.g., a tractor trailer) to move the attenuated vehicle.

A DOT spokesperson from Ohio shared similar information, citing that fatal crashes in work zones were up in 2020 from 2019, despite fewer drivers on the road. Virginia and other states across the country reported the same problem.

Part of the reason for the increase in work zone incidents could be that many state DOTs have used lighter traffic during peak hours to step up maintenance, repair and construction efforts. However, in almost every case, driver speed is being cited as the primary cause behind the increase in crashes, injuries and deaths.

Freeways and interstates that used to be slowed down by rush-hour traffic are now wide open. In Chicago, the average speed on Interstate 290 went from 24 mph to 62 mph. In Los Angeles, Interstate 405 – famous for its gridlock prior to the pandemic – saw its average rush-hour speed go from 19 mph to 68 mph. 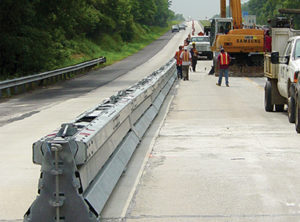 Because there are fewer cars on the road, the drivers who are left can go faster – in many cases, much faster. The number of tickets issued for going 100+ mph is up nationwide. In California for example, the number of 100+ mph tickets issued doubled compared to the same time period the previous year.

“With less cars on the road, we would expect that crashes and citations would be down. And what we’re seeing is an increase in dangerous speeding and dangerous driving,” said Jeff Marootian, director of the D.C. Department of Transportation.

Speed is a major factor in the outcome when workers and pedestrians are struck by vehicles. When vehicles are moving faster, the chances of escaping a work zone intrusion alive go down dramatically. At 23 miles per hour, 90 percent of pedestrians survive the impact with a vehicle. At 42 mph, it’s only 50 percent. At 58 mph, only 10 percent of people survive. So while a car traveling at 100 mph is clearly unsafe, even an increase in speed from 30 mph to 50 mph can create a serious hazard for workers.

Distracted driving is also on the rise. Research found phone use while driving was up 38 percent in April of 2020, for example. Hard braking, a potential indication of distracted driving, was also up 25 percent. The combination of increased speed and distracted driving gives motorists much less time to react to changing conditions behind the wheel, such as a lane change or a lane closure for a work zone.

It’s likely that traffic levels will return to pre-pandemic levels this summer and fall as more Americans are vaccinated. That’s not something drivers who have gotten used to more open roads will look forward to. After all, none of us want to spend more time in traffic. But it may mean safer conditions for the workers who spend their days along our roadways, and safer conditions for motorists too. That’s a silver lining we can all get behind.